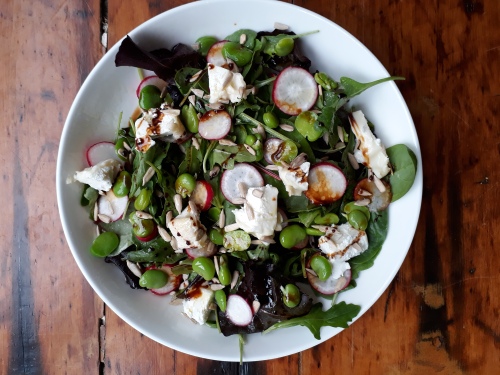 I’ve had a little break from blogging for a while, mainly because I quite like absenting myself from all forms of social media every now and then. It’s perhaps not coincidental though that my break coincided with the ‘hunger gap’, the time of year when there is least fresh produce available to pick and eat. It’s been a busy time down on the allotment though, with a feverish period of digging, weeding, manuring and planting- and now we are finally starting to reap the rewards.

END_OF_DOCUMENT_TOKEN_TO_BE_REPLACED

The clocks going forward last weekend mean several things. First is that my children will wake up absurdly early, full of vim and vigour, at a time fit for only dairy farmers and red-eye pilots. Another is that an increase in warmth and daylight will start to frisk up my tastebuds. Cravings for cheese on toast and chunks of Stilton wane in favour of something a wee bit fresher and lighter. Coincidentally this is the season when fresh goat and sheep’s cheeses start to appear after a winter break; so either my tastebuds are works of evolutionary genius, perfectly in tune with nature’s cycles, or else I’ve been reading too many spring recipes in the Waitrose magazine. Either way, it was a goat’s cheese that took my fancy on a recent spending spree in Neal’s Yard Dairy and very seasonally cheeseonal Sleightlett is too. 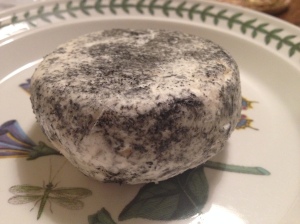 END_OF_DOCUMENT_TOKEN_TO_BE_REPLACED

Never one to miss the opportunity to try several new cheeses in one sitting, I recently hiked across to Brixton again to one of Ned Palmer’s tastings at Cannon and Cannon. If you missed the last instalment, ‘Eight Cheeses in One Day’, you can check out what I snaffled last time here.

The theme of this tasting was ‘Cheese and Culture’ in which Ned attempted to show how cheese has evolved through history according to the environments and societies which produced it. With two hours ticking on the clock and just eight cheeses on the plate (just eight cheeses!), Ned himself admitted that it was never going to be a comprehensive and chronological survey of global cheese history but it was certainly interesting. I won’t attempt to reproduce everything he said, partly because he might sue me and partly because I drank some beer and can’t remember. But I will tell you about the lovely cheeses and drop a few nuggets of information in as I recall them.
END_OF_DOCUMENT_TOKEN_TO_BE_REPLACED