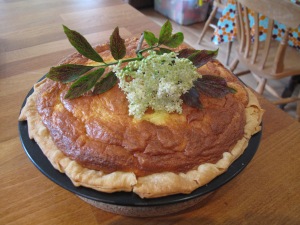 There’s something so green and abundant about May that it brought out the forager in me this week. Considering that the wildlife round my way consists mainly of pit bulls and shouty people, this was an optimistic undertaking but nevertheless I headed out with my special foraging trug to see what I could find. And one lonely Elder tree was my prize.

Elderflowers are always something of a surprise. They’re pretty enough in their own blowsy way but then so are cow parsley and hemlock and they’re not something you’d want to be making champagne out of any time soon. It’s when you smell an elderflower – the heady, not-quite-sweet, almost alcoholic scent – that you realise its potential. My parents used to make firewater out of anything they could rummage out of a hedgerow so I have vivid memories of the kitchen lost in a perfumed cloud of creamy elderflowers.

The Latin for Elder is Sambucus which is where this recipe gets its name from (as does the Italian liqueur Sambuca, which also contains elderflowers). It dates back to medieval times, when the Elder tree was steeped in folklore. As well as culinary uses, the Elder was the go-to plant for warding off witches, seeing off evil and imbuing dew with beauty-enhancing properties. There are still parts of Britain where people refuse to chop down Elders for fear of angering the spirits. 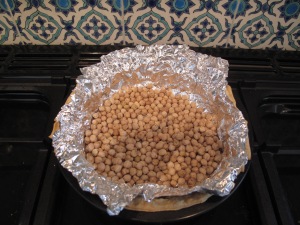 Cream together the egg yolks and caster sugar until almost white and shiny then add the cheeses, beating until well blended. Stir in the breadcrumbs, elderflowers and flower water. 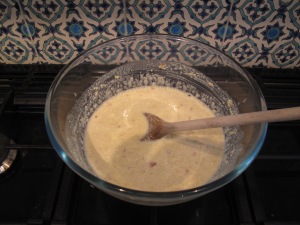 Beat the egg whites until shiny and stiff. Fold gently into the cream cheese mixture. Bake for 45 minutes. Delicious served with crème fraîche or stewed fruit (we ate it with a nice seasonal rhubarb). 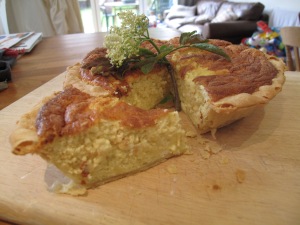 It’s more delicious than the list of ingredients might suggest; the breadcrumbs give it a cake-like texture but the addition of the egg whites keeps it light and fluffy. You could make it all with cream cheese but I substituted half for ricotta which contrasts well with the sweetness of the elderflowers. The original recipe bakes it in a shortcrust pastry but you could also bake it without, like an egg custard, or in single ramekins.