I just love the name of this cheese. I wasn’t sure how to say it when I bought it and the nice young chap who was selling it couldn’t enlighten me but I liked to think of it as pronounced like ‘Baron BY GOD!’, preferably by Brian Blessed, whilst dressed as Henry VIII. I was terrified that in the course of researching the cheese I would find out that it was actually pronounced ‘Bee-Go’ or somesuch but fortunately ‘BY GOD!’ it is. Genius.

So, here is Baron Bigod, throwing its voice from the diaphragm, darling, and shaking its magisterial beard: 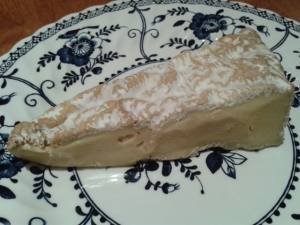 Baron Bigod is a soft, unpasteurised, cow’s milk cheese made by Jonny and Dulcie Crickmore of Fen Farm Dairy in Suffolk. The Crickmores are another example of farmers who decided – in 2010, in their case – to diversify production to compensate for falling milk prices. They wanted to regain control of their produce and how it was processed and sold and cheese-making seemed like an ideal solution. So they set about visiting other cheese-makers in the UK and talking to wholesalers and retailers, including Randolph Hodgson of Neal’s Yard Dairy, about what was missing from the British market and, following their research, decided on a large, unpasteurised Brie de Meaux style cheese.

Courses in cheese-making followed, including at the School of Artisan Food, run by French cheese-making consultant, Ivan Larcher. Ivan became a mentor to the couple and they worked intensely with him over the next couple of years to develop the cheese. It’s been a huge investment of both time and money, right down to purchasing a new herd of Montbeliarde cows, from the Alpine region between France and Switzerland, to provide the ideal milk for their enterprise. Ivan also insisted that the milk should be unpasteurised, an idea which the Crickmores have embraced – they even have a public vending machine selling raw milk to the public now!

The Gallic cows are milked twice a day and straightaway the still-warm milk is gravity-fed into the cheese-making vats; this is rather than pumping it which it’s believed can damage the fats and proteins within the milk and hence reduce the quality of the cheese (less fat equals less creamy). Starter cultures are added and then rennet, and the resulting jelly-like curd is cut with a ‘cheese sword’ (how very Brian Blessed!) into squares. It’s then ladled into 2cm-deep moulds – using traditional pelle-a-brie ladles – to drain the whey, a process that they want to happen quickly as the whey leaches calcium out from the curds which can result in a chalky, dry cheese.

The cheeses are then hand-salted and turned and on day three of the process are moved to a hastening room, which is much cooler than the making room, with a high humidity. After three or four days they then trundle off to the ageing rooms which are cold and damp, where the smells and tastes really start to develop. Finally they are packed off to a drying room and aged for up to eight weeks. The first batches of the cheese only became available in mid- 2013 but they are already selling the cheese in Neal’s Yard Dairy, as well as other retailers.

Taste-wise, it’s exactly what you would expect of a fine Brie, all mushrooms and farmyard and the texture is deliciously creamy and not at all chalky, as you get with some supermarket Bries.

And the Baron, pray what of him? Well, Baron Bigod was a 12th-century Earl of Norfolk who lived in a castle over-looking the farm. Rather fittingly, they were a family of medieval Norman origin and so probably wouldn’t have turned their noses up at a nice Brie-style cheese.