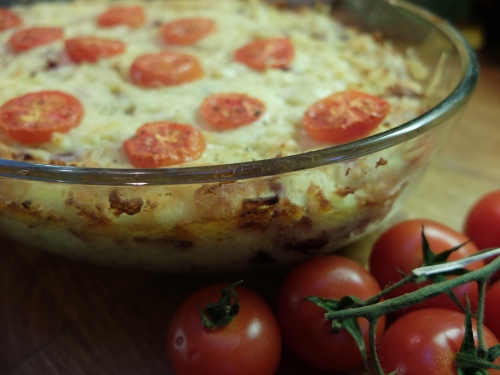 I first thought of making this dish a couple of weeks ago when some Irish Cheddar arrived as part of the Pong Irish Selection Box. There’s nothing fancy about it and – so I thought at the time – nothing controversial. But that was before the latest Mary Berry furore, otherwise known as ‘Pie-Gate.’ So, it turns out that a pie is not a pie unless there’s a great deal of pastry involved. Mary tried to get away with just a pastry top but was soundly castigated by the chairman of the British Pie Awards. Mine is entirely free of pastry. I’m still calling it a pie. I could call it a bake but I’m not going to. So there.

The Little Milk Company Mature Cheddar is a hard, unpasteurised, cows’ milk cheese, made by a co-operative of organic dairy farmers who are spread throughout the Irish provinces of Munster and Leinster. They also make the washed rind Brewer’s Gold. Aged for up to 12 months, as Cheddars go it’s rich and nutty and in this dish melts well to make a comforting supper dish. Serve with green vegetables for a meat-free meal; we ate ours with sausages.

Mix the mashed potato with the cooked onion and 200g of the grated cheese. Season well with salt and pepper and put the mixture into a baking dish. Sprinkle the rest of the cheese over the top, season with nutmeg and garnish with the sliced tomatoes. 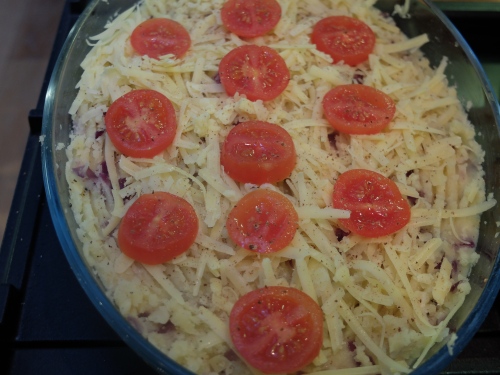 Bake for 20-25 minutes until the cheese has melted throughout and the top is lightly browned. Serve hot.