There are many fine Scottish cheeses I could have brought to you on Burns Night: Lanark or Dunsyre Blue, gorgeous cheeses sadly not currently in production; punchy cheddar types from the Isle of Mull or Barwhey’s; the stunning enigma of a cheese that is Paddy’s Milestone; or the bluest blue cheese ever seen, Hebridean Blue. Instead, dear reader, I’m bringing you a cheese from the time when Nordic men with big beards spelled trouble rather than the launch of a hipster hygge café. 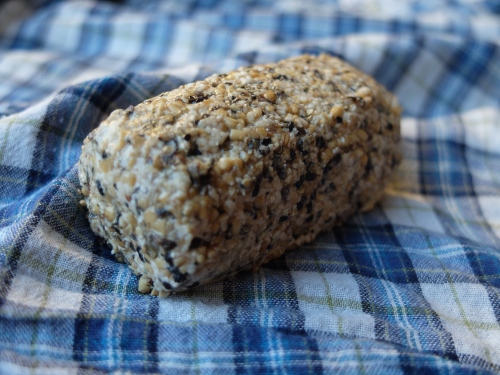 Black Crowdie is a pasteurised cow’s milk cream cheese, produced by Highland Fine Cheeses in Tain in the Scottish Highlands. The cheese is also known by its Gaelic name Gruth Dhu and is coated in pinhead oatmeal and crushed black pepper. It is thought that the cheese owes its origins to the Viking occupation (c. eighth century – fourteenth century) and was thereafter a crofter’s cheese, made in most homes, from the milk skimmed of its cream to make butter. The milk would be left to sour in the sun or near the fire and was then cooked until it curdled. Salt and perhaps cream were then added and the curd cheese would be hung up to drain. ‘Crowdie’ was originally the name of an oatmeal porridge, eaten as a staple and so came to denote any common foodstuff, in this case home-made cheese.

The history of Highland Fine Cheeses is told here by its owner, Rory Stone, far more hilariously than I could hope to compete with. In a nutshell, Rory’s parents, Reggie and Susannah (plus 14 cows and a vicious, possibly alcoholic bull called Geordie) started producing cheese in the 1950s, commercially in the 1960s. As Rory says, this was a traditional way of life in the Highlands and Islands, to brighten up a ‘tedious diet of mutton, neeps, oatmeal and roadkill.’ Sarah Freeman in The Real Cheese Companion describes Susannah’s initial cheesemaking attempts – ‘cooking’ the curds in hot bath water and draining them in an old pillowcase, whilst evading the beady eye of the local sanitary inspector.

Crowdie is made from pasteurised milk these days, which doesn’t naturally sour in a pleasant way, so the Stones add a starter culture to the milk. When the curds have been cooked to the consistency of scrambled egg, they are then mashed, salt and cream are added and they are hung in muslins to drain off the whey. The oatmeal and peppercorns were an innovation of Susannah’s; they also produce versions with wild garlic (Hramsa) and toasted hazelnuts (Galic).

I’ll admit that I was nervous about trying this cheese as previously I’d sampled the company’s Caboc, which even Rory describes as a ‘filthy 14th century rancid butter that should never have made it into the 15th.’ Harsh perhaps but Caboc is certainly an acquired taste. Fortunately Crowdie is a different beastie altogether. With the texture of truffled chocolate, creamy but slightly flaky, the taste is fresh and lemony and contrasts well with the spiciness of the black pepper. Traditionally used to line the stomach before whisky, it’s both a delicious and useful cheese.

And Rory? I have to say that he sounds hilarious. Asked in an interview last year about his plans to develop a washed rind cheese, he said ‘I’m going to call it Minger.’ Now that I would like to see (if perhaps not eat…)

Additional research from The Press and Journal