Given that tomorrow is Burns Night, I thought I would take the opportunity to correct the terrible fact that I haven’t yet featured a Scottish cheese (I know, I know, the shame etc.) So, without further ado, I offer up a suitably cheesy excerpt from The Holy Fair by one of the first cheesemongers of Scotland (oh yes, read on fact fans), Mr Robbie Burns:

Burns was no stranger to cheese, as his mother was a peasant cheese-maker; as a boy he often helped out, selling the cheese locally (which makes him a cheesemonger in my book). And so, without further ado, raise your whisky glasses, butter your neeps and say hello to Scotland’s oldest cheese, Caboc: 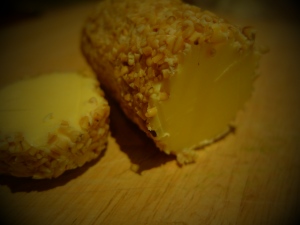 Caboc is a pasteurised, cow’s milk, cream cheese, made by the Stone family of Highland Fine Cheeses Company. The name ‘Caboc’ is thought to be a hybrid of ‘Cabag’, Gaelic for a homemade cheese and ‘Kebbock’ which is a Scot’s word for a farmhouse cheese. It dates back to the fifteenth century and its origins are shrouded in legend. It’s said to have first been made by Mariota de Ile, the daughter of the clan Macdonald chieftain. Afraid of being abducted by the Campbell clan so that they could marry her and seize the Macdonald lands, she was sent across the sea to Ireland. There she learned to make cheese and when she returned to her family, the recipe was passed down through the generations, from mother to daughter. It’s a rich cheese, made with double cream or cream-enriched milk and so was perfect for a chieftain – a ‘white meat’, as opposed to Crowdie, another historic Scottish cheese, which is made from skimmed milk.

Susannah Stone is a distant relative of the creamy cheese-loving Macdonalds and revived the cheese in 1962. She runs the business with her son Ruaridh from a converted coastal brewery in Ross-shire where they buy the milk from a local co-operative. The cows are sturdy northern types – Ayrshires and Friesians – who produce rich milk. Caboc is an unusual cheese with an artery-clogging fat content of about 68%. It’s made by skimming the cream off the milk, adding starter cultures to the cream and then leaving it to mature in milk churns for at least three months. The soured creamy-milk mixture is then drained before being shaped into little logs and rolled in pinhead oatmeal.

There seem to be two stories regarding the origin of the oatmeal. One is that a long-ago herder stored his cheese in a box previously used for oatcakes and liked the taste so much that Caboc was then always made that way. The other is that Susannah Stone made it an addition as she thought it enhanced the flavour and improved the texture.

Caboc is also unusual in that I think it’s the first cheese I’ve come across whose producer doesn’t exactly sing its praises. Ruaridh Stone is variously quoted as saying, ‘I think it’s a taste which should stay in the 1970s, but it has had a revival’ and ‘For some it tastes like rancid butter rolled in oatmeal, some might say nutty, but with that much fat there’s little of any flavour. Selling the cheese is a nightmare as it really is a Scottish specific line, the French say it is butter, the English just don’t get it and so it’s mainly eaten by people with triple heart bypasses and purple noses. At 70% butter fat it’s a kind of heart grenade.’

Reading out this quote caused much mirth and cries of ‘doing a Ratner’ in my household but sales of Caboc don’t seem to show any sign of declining. And how did it taste? Well, not rancid at all but equally not very…erm…cheesy. If ‘cream cheese’ makes you think of Philadelphia, think again, as it’s not that kind of taste at all. It mostly tastes like butter, so not an unpleasant taste but just not quite what you’re expecting when you eat cheese. I think I definitely subscribe to English stereotypes here and ‘just don’t get it’. Perhaps washed down with a little whisky though…