There are many annoying things about possessing small children but one of the worst has to be the terrible potential for ear-worm. But – wait! – before you start leaving in droves, horrified at a food blog discussing parasites, don’t worry, it’s not like ring worm or tape worm but instead is a term for a catchy piece of music that gets stuck in your head. Children’s television is the worst offender when it comes to embarrassing yourself in polite company by singing about Mr Bloom’s compostarium or Rastamouse’s Da Easy Crew. But the most evil ear-worms of all come from the irrepressibly jaunty Tractor Ted; as a result I can’t think about buffaloes without hearing ‘they’re big, black and slow – the buffalo!’ I had to eat this week’s cheese just to stop me hearing it every time I opened the fridge. 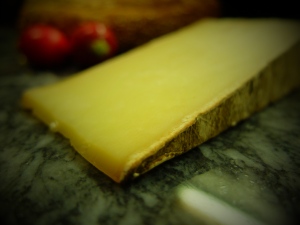 Pendragon is a hard, pasteurised, buffalo milk cheese made by the Somerset Cheese Company, located, unsurprisingly, in Somerset. The Company was established in 2005 by cheese veteran Philip Rainbow, along with two of his friends, Nicholas and Anita Robinson. Philip had been making cheese for other dairies since the 1960s and at one time Anita had been his assistant. Rather unusually, they produce cheeses from cows, sheep, goats and buffaloes (big, black and strong – the buffalo!). The name Pendragon comes from the Somerset connections with the King Arthur myths (and perhaps also to alliterate nicely with some of his other cheeses, Pennard Ridge and Pennard Vale).

The buffalo milk is sourced from a farm in Hampshire. The milk is pasteurised and the curds are moulded, pressed overnight and matured for between four to twelve months, when it develops a natural rind. The process is overseen by one person – usually Philip – from start to finish, whose instinctive attention to detail means that subtle changes can be made along the way to account for seasonal or temperate changes in the milk. Philip calls this his ‘cheese clock’ and says that ‘After a long time of making cheese, you get an automatic feel for the process. I’ll work on the rennet, the curds and whey and the junket without thinking. How you treat it all at different times determines the cheese.’

Given that they are located in the heart of Cheddar country, it’s no surprise that Pendragon is made in a Cheddar style. The texture is a bit different though, more buttery and mouth-melty. The taste is also not unlike a mellow, mature Cheddar but for the distinctive, slightly sour tang of the buffalo milk. All that I’ve read seems to indicate that buffaloes are not the most placid and amenable of creatures so quite how you milk one is anyone’s guess. But then I’m the person who once got savaged by a bunch of cows and they seem to knuckle down and do the milking parlour business. Fortunately for Philip, he just needs to worry about the cheesy bit and not the buffaloes (altogether now – ‘big, black and slow…’).