I seem to have gone a bit forage crazy, or as crazy as you can when you live in the proverbial concrete jungle. One plant that isn’t fussy about the air quality or proximity to rolling hills is nettles (although I read that if you live in the US, you have to buy them from special hippy stores – is that really right, Stateside folks?) I tried the blue cheese and nettle combination last year when I made Blue Cheese and Nettle Drop Scones and it was surprisingly good; the herbal, slightly fizzy taste of the nettles complementing the tang of the blue cheese.

I’d never made gnocchi before so this seemed like a good time to start (well, apart from the fact that I was exhausted from being out in the garden all day, had two grumpy children to feed and bath, and absolutely nothing else to eat if it went wrong). Fortunately it turned out really well and wasn’t as tricky to make as I thought. I used Cashel Blue cheese, which being both creamy and salty was perfect for the sauce. Made in County Tipperary in Ireland, it’s a cow’s milk cheese, produced by the Grubb family from their pedigree British Friesian herd. They also produce the stunning Crozier Blue, made from ewe’s milk.

Nettles obviously have stingy tendencies but if you put them in a colander and pour over some boiling water, it lessens potential nastiness (and also gets rid of aphids, cuckoo spit and dog wee, with any luck).

Next, whizz the potato, garlic, egg, nettle leaves and half the flour in a blender until combined. Add the rest of the flour and give it another whizz; it should take on a dough-like consistency, although may still be quite sticky.

Turn it out onto a floured surface and knead it with well-floured hands. Divide the mixture into four and make four ‘snakes’, about as thick as your thumb. Then cut into gnocchi-sized pieces and either leave them in that shape or roll them into balls.

Bring a large pan of salted water to the boil and drop in the gnocchi. Whilst they are cooking, put the blue cheese and crème fraiche into a non-stick pan and melt together to make a sauce. Season to taste.

The gnocchi will be cooked when they rise to the surface. Scoop them out with a slotted spoon, drain and arrange on a plate. Pour the sauce over the top, garnish with chopped chives and serve hot.

Because this recipe uses both cheese and the seasonal ingredient of nettles, I am sharing it with this month’s Cheese, Please! Challenge.

I’m also sharing it with Pasta Please, hosted by Tinned Tomatoes and Franglais Kitchen, where this month’s theme is pasta sauces. 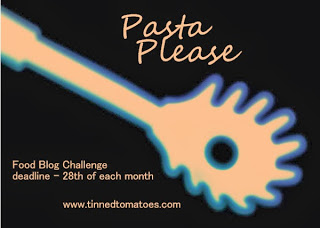