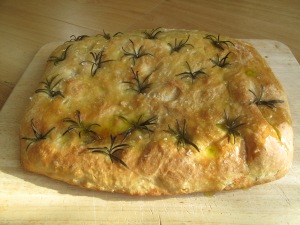 In Britain, you can spend all summer waiting for summer. Lifestyle magazines might be full of picnics, laid out on gingham table-cloths outside gypsy caravans, spotted bunting fluttering from the trees, but the reality is more likely eating squashed cheese sandwiches in the car whilst the rain hammers on the roof. And if you have small children, there’s no romance to picnics anyway, just constant complaints about grass in sandals, giant bees, the lack of crisps and how ‘disgusting’ your lovingly-prepared quiche is. Really, don’t bother.

So I decided to stop waiting for the sun to come out and get on with making the focaccia I’d been thinking about. I was considering a ‘Quattro Formaggi’ focaccia but it started to feel a bit like cheese over-kill so I settled for three cheeses – mozzarella, dolcelatte and parmesan. It’s best eaten warm from the oven so the cheeses are still squidgy but it’s also nice cold. Predictably, Son the Elder refused to touch it because it contained ‘ponky’ cheese and ‘has palm trees on the top’.

Mix together the flour, yeast, salt, olive oil and water until a dough is formed. Knead it for about 5-10 minutes until the dough is smooth and elastic and forms a ball. Place the dough in an oiled bowl, cover with a tea towel or cling-film and leave in a warm place for about an hour until well risen.

Divide the dough in half and roll or stretch each piece out to about a 25cm round.

Place one dough round on the baking sheet, and brush water around the edge. Arrange the slices of mozzarella on the top and then scatter the dolcelatte and basil leaves over, tearing them if the leaves are very large. Add a good old grating of parmesan and a sprinkle of black pepper and then put the other round of dough on top and press down around the edges to seal.

Cover it with oiled cling-film and leave it in a warm place for about an hour or until the dough has doubled in size. Remove the cling-film. Uncover the dough and use your fingertips to make little holes all over the top. Brush about 1 tbsp olive oil over the top and press sprigs of rosemary into the holes. Sprinkle with salt.

Bake for about 20-30 mins or until the bread is golden. Cool on a wire rack and then drizzle the remaining olive oil over the top. 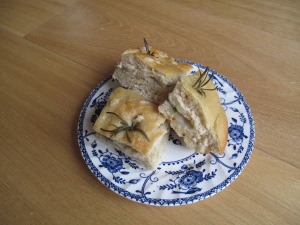