Writer G. K. Chesterton once wrote that ‘poets have been mysteriously quiet on the subject of cheese.’ It could also be said that, in comparison to Welsh, Scottish and English, this blog has also been somewhat tight-lipped on the particular subject of Irish cheese. Not entirely – Brewer’s Gold and Coolea have both featured – but still, some work to be done to redress the balance. So, with St Patrick’s Day just around the corner, when online cheese specialists Pong Cheese asked me if I’d like to review their Irish Selection Box, it seemed positively serendipitous. 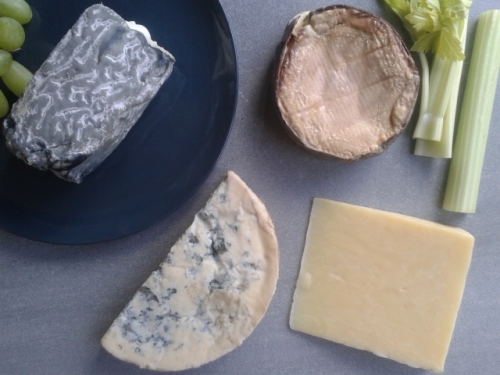 The history of Irish cheese-making followed a different path to that of England, Wales and Scotland. For centuries, dairy products were central to the Irish diet; as well as cows, they milked goats, sheep and even deer. Slow Food Galway tells us that ‘Tanag and Grus were hard pressed skim milk cheeses, Faiscre Grotha was a fresh type of pressed curd cheese and Tath was made from sour milk curds.’ Cheese features in the folk tales of pre-medieval times: a queen is killed with a rock-hard piece of Tanag fired from a slingshot whilst a warrior has buttocks each the size of a Maethal (a large, round, soft cheese).

Yet, by the end of the eighteenth century, cheesemaking had almost completely died out, partly because potatoes had become the staple food and also because farmstead milk was mostly used to make butter. It was not until the 1970s that interest grew again when a pioneering group of artisan producers – some of them immigrants who brought the traditions of France, Holland or Switzerland with them – started making cheese in Ireland. Gubbeen, Ardrahan, Milleens and Coolea are just some of the cheeses that came out of this renaissance and which helped propel Ireland to its place on the international cheese stage.

Pong was founded in 2010 by two friends keen to promote artisan and independent cheesemakers from the British Isles, as well as some classics from the continent. The Irish Selection Box is just one of several themed boxes they offer, as well as selling individual cheeses and it celebrates both veteran producers like Carrigbyrne and relative newcomers such as the Little Milk Company. I’ll be writing some more about these cheeses over the next couple of weeks, leading up to St Patrick’s Day on March 17 but, to whet your appetite, the choice of cheeses (a goat, a blue, a Cheddar and a stinky) represent a great selection for a varied and interesting cheeseboard:

There are some great cheeses in this box, which really showcases Irish cheesemaking. I wouldn’t call it an entry-level cheese selection, as there are some powerful personalities in there but if you’re after a gift for someone who can handle their cheese, this is a great option. The Other Half summed it up well with his: ‘This is an adults’ cheese selection. This is cheese for grown-ups.’

Disclosure: I was sent an Irish Selection Box by Pong Cheese for review purposes. All opinions expressed are my own.