English muffins, that is. Not your blueberry-stuffed American monsters. We’re talking bread not cupcake. This was the first time I had attempted to make an English muffin and I was nervous, especially considering the time you need to fry them for. But, aside from the time needed to prove them, they turned out to be no bother at all. In this recipe, Sparkenhoe and black pepper come together to pep up a classic.

I try and remain partisan about cheeses on this blog but I have to confess that Sparkenhoe is undoubtedly one of my favourite British cheeses. This is partly because they once let me visit them and everyone working there was patient and generous with their time. But mainly because it’s just a superb cheese. Red Leicester gets a bad press and not without good reason; much of it is processed and shrink-wrapped beyond recognition.

Sparkenhoe is a world apart. It’s a cheese that tastes of nutty biscuits and browned butter and, although I know that the annatto added for colouring is supposedly tasteless, there’s something almost spicy about it. I came across an author writing in 1880 about traditional Red Leicester which sums it up far better than I could: ‘there is a fullness of flavour about it, a meatiness, a warmth and wealth of quality, that reminds us of fruit that is produced from a rich soil and ripened in a more genial climate.’ And if that doesn’t make you want to try it…

Sift the flour and salt into a bowl and add the grated cheese and black pepper.

Warm the milk slightly so that it is lukewarm, then add the yeast and sugar, mix well and leave for 5-10 minutes until the mixture looks frothy.

Make a well in the centre of the flour, add the yeast mixture and bring it all together to form a dough. Knead the dough on a floured surface for 10-12 minutes, then put it into an oiled bowl and cover it with clingfilm. 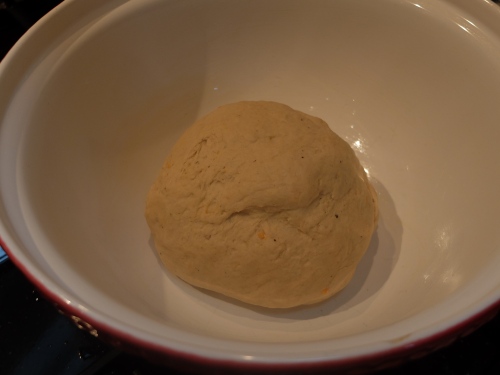 Leave the dough to prove for about an hour, until it has doubled in size. 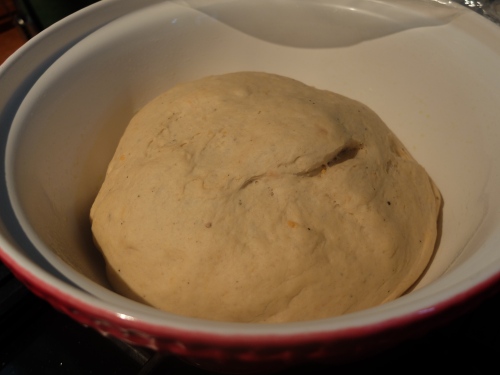 Knock back the dough, knead it briefly for a couple of minutes and then leave for another 30 minutes. After this time, without knocking it back, divide the dough into ten equal pieces. Sprinkle your baking trays with semolina, form the pieces into balls, flatten them slightly and put them on the trays. Cover them with semolina and leave for another half an hour. 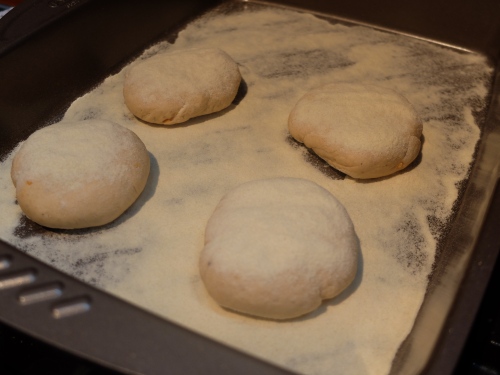 Lightly oil a heavy frying pan and fry the muffins over a low heat. Keep an eye on them as they can burn easily. You will need to cook them for about ten minutes on each side. The traditional way to serve them is to tear, not cut, the muffins apart and let a knob of butter melt in the middle. I ate mine with butter and watercress as I think it goes perfectly with Sparkenhoe cheese. The Other Half made the controversial move of eating his with blue cheese and informs me that they go together very well.