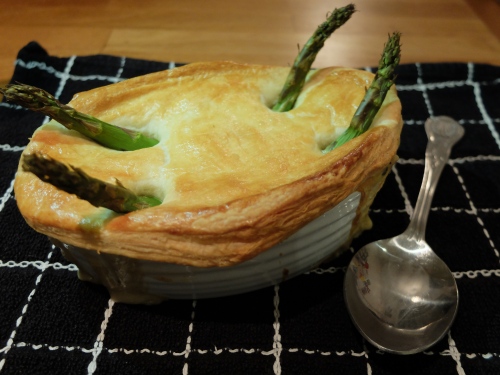 One of my favourite blogs is Mrs Portly’s Kitchen. If you haven’t come across it before, do check it out for a wealth of local, seasonal and also more exotic recipes. I do, however, have one criticism of its author, Linda, and that is her point-blank refusal to cook and write about Stargazy Pie. For those unfamiliar with the dish, it’s a Cornish speciality, renowned for the fact that the heads of the baked pilchards poke out through the pastry. You can see photos of it here, as well as read about the legend of heroic fisherman Tom Bawcock, who is said to have inspired the dish.

Every now and then Linda will ask on Facebook: ‘What do people think I should cook and blog about?’ and every time I pipe up with ‘Stargazy Pie! It would be a great idea because pilchards are in season/it’s National Pie Week/it’s St. Piran’s Day!’ ‘No,’ says Linda, without fail. ‘Make it yourself if you’re that fascinated.’ I never have though as, blogging about cheese as I do, I don’t fancy the idea of pilchards and Cheddar or, indeed, any kind of cheese.

Then, last week, I saw a competition run by the Cornish Cheese Company. The idea was to cook something with their Cornish Blue cheese, a cheese I’ve written about before, here.

A pie with Cornish Blue in it sounded like a mighty fine idea, as did recreating Stargazy Pie for vegetarians (Cornish Blue is suitable for vegetarians) or those squeamish about their supper looking at them. I found the idea of using asparagus as a pilchard substitute on the website of supper club supremo Ms Marmite Lover and so we were good to go: vegetables in a Cornish Blue sauce, topped with puff pastry and peeky asparagus spears. And the pilchards? Well, Mrs Portly, the challenge is still out there…

100g button mushrooms, cut in half

Heat the olive oil and butter in a large frying pan or cooking pot and sauté the onion, carrots, leek and asparagus stalks for about ten minutes, stirring to make sure they don’t stick and burn. Add the mushrooms and cook for a further five minutes. 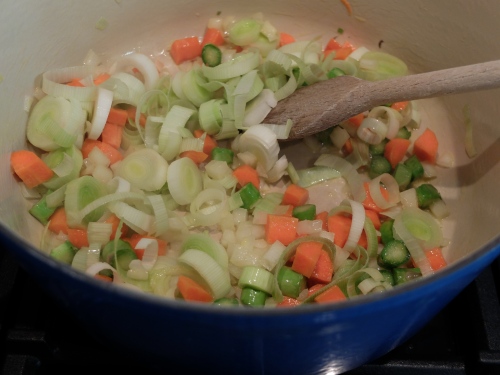 Add the flour and stir well to mix it through the vegetables. Add the milk gradually, continuously stirring so that it forms a white sauce around the vegetables. 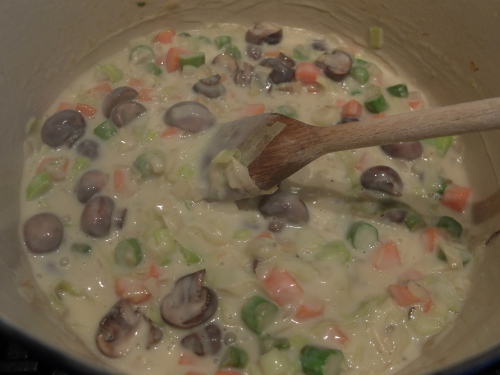 Add the thyme leaves and season with pepper. Hold off on the salt for now and add the cheese next, stirring as it melts through. Check for seasoning and pour the mixture into one large dish or individual ramekins. 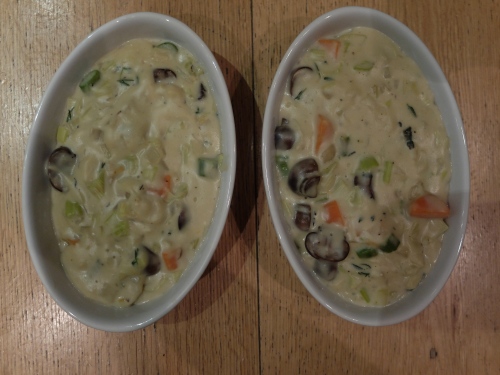 Roll out the pastry to about 1/2cm thick, drape it over the dish and cut to size, using scissors and leaving a slight overhang. Press down to secure it on the edges of the dish. Using the point of the scissors, make several small holes in the top of the pastry and poke the asparagus stalks through to leave the spears showing. It helps if you cut the stalks to make a pointy end and you also need to be prepared to wiggle them about a bit, so that they don’t get in each other’s way. Brush with the beaten egg.

Bake in a pre-heated oven at 200/180 fan-assisted/Gas Mark 6 for about 30 minutes, or until the pastry is golden and the mixture bubbling inside.

And yes, I do realise that they look a bit like Desperate Dan’s Cow Pie.