A Visit to Caws Teifi 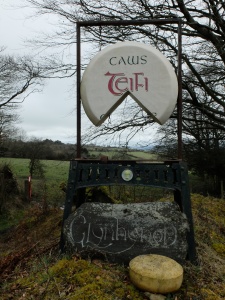 I was a bit nervous as I drove down the winding lanes that lead to Glynhynod Farm in Ceredigion, West Wales. John Savage-Onstwedder, the maker of Teifi cheese (in Welsh: Caws Teifi, the former to rhyme with ‘mouse’ and the latter pronounced ‘Tie-vee’) is known as ‘the Godfather of Welsh artisan cheese’ and makes the most highly-awarded cow’s milk cheese in Britain. He’s cheese royalty, if you like.

Glynhynod means ‘remarkable valley’ and the farm is situated in the sort of countryside where banks and valleys soar up to slopes with views of distant hills and then as quickly dip down to rivers and lush pastures. John has been in Wales since 1981 when he moved from Holland where he had been involved with organisations concerned with sustainability, alternative technology and organic farming. After settling at Glynhynod Farm, he began making cheese in 1983 to a centuries-old Gouda recipe. He now also produces traditional Caerphilly and the renowned washed rind cheeses Celtic Promise and Saval.

The Godfather of Caws

The milk for Caws Teifi cheese comes from a single herd which graze by the sea a few miles away. As well as possessing a natural salinity, the milk is also influenced by the unique coastal plants of the pastures and hedgerows. John believes that this, coupled with a commitment to using raw milk, results in cheese with a complex flavour. The milk is not heated above 37 degrees, the body temperature of a cow and so is never warmer than it would have been in the udder. John is passionate about raw milk cheese: ‘No mammals feeds their young pasteurised milk. Calves, lambs, piglets – when they’re born they all need the first milk, the colostrum, or they won’t survive as it’s so full of antibodies and nutrients. Breast really is best.’ John chuckles. ‘You can quote me on that!’

Unlike the long, metal vats of Sparkenhoe, Teifi is made in a traditional teak vat from Holland, much smaller and round, about the size of a hot tub but deeper. It’s a design that has influenced the traditional Gouda recipe; because the vats were wooden, when cheesemakers wanted to increase the temperature of the milk, they couldn’t put them over a fire or apply other open forms of heat, so they added hot water instead to heat the milk. At Caws Teifi, after the curd has been cut into small pieces, half of the whey is drained away and replaced with hot water. This ‘washed curd’ method of cheesemaking removes some of the lactose that would otherwise be broken down during maturation to produce the characteristic tang of cheeses like Cheddar. Washed curd cheeses are instead defined by a sweet, nutty taste.

John uses old-fashioned cheese presses, one Dutch and one English, but both 130 years old, pillar-box red and all wheels and giant screws. The presses enable them to control the pressure on the cheese manually so that they don’t press out too much whey at the start of the process, which can result in a bitter-tasting cheese. John also prefers them as ‘they don’t break down all the time like automatic, hydraulic ones do.’ 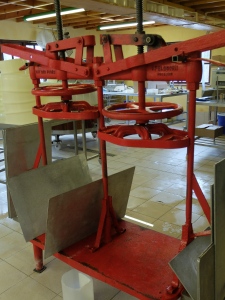 Once pressed, the cheeses are soaked in a brine solution for anything from 8 to 84 hours, depending on their size. They are then coated in resin rather than wax, which allows them to breathe as they mature. Each cheese also carries a label, pressed into the body of the cheese and which is ingeniously made from casein – a protein found in cheese. The label identifies the cheese which means they can be traced back to the batch of milk and day on which they were made.

As well as making plain versions of the Teifi and Caerphilly cheeses, John also produces flavour-added cheeses or ‘cheese with bits in’ as it’s more commonly known, a fact for which he is unapologetic: ‘Here we make cheeses with added nettle, seaweed – local laver from the Welsh coast, cumin, onion and garlic, and sweet peppers. Some people don’t like cheese with bits added to it, they think that it shouldn’t be there, that it spoils the flavour of a cheese. But the Dutch were making cumin cheese as far back as the seventeenth century, there’s records of it being made in the 1640s. Adding herbs and other things is not a new innovation.’ Indeed, the Dutch weren’t alone; the Welsh were known to add sage to their Caerphilly for high days and holidays.

‘Cheese with bits in’

If the weight of historical evidence isn’t enough to convince you to eat cheese with bits in then John also has a tale of celebrity endorsement. Back in 1955, a svelte and handsome trainee teacher from Modena in Italy travelled to Llangollen in North Wales to perform at the International Eisteddfod. He had joined his father’s choir, an ensemble which went on to clinch the prize that year in the male choral competition. That amateur warbler was none other than Luciano Pavarotti. The tenor vowed to one day return and, forty years later, in 1995, he fulfilled his promise. ‘He was staying in a hotel in Llangollen, probably a top-end hotel,’ recounts John. ‘He ordered the cheeseboard from the hotel menu and Teifi with Seaweed was on there. Well, he said it was one of the best cheeses he had ever tasted – this, a man who travelled all over the world and who was so paranoid about food and his throat that he had his own personal chef! He was due to travel on to New York but said “Where is this cheese from?” and when he found out sent someone down here, on a 200-mile round trip, to buy 10kg. After that, he would often order some to be sent to his house in Italy.’ 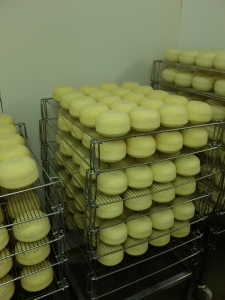 Young Caerphillies, waiting for their wash

John also makes Caerphilly cheese which is sold both as a young cheese but also matured for up to eight months. But most of all they are famous as the washed rind cheeses, Celtic Promise and its larger version Saval. Caerphillies are matured to five weeks and then washed in a solution containing the Brevibacterium linens bacteria, which works to mature the cheeses by breaking down proteins and releasing ammonia. Thereafter they are washed three times a week for six weeks before being ready to eat. (You can read more about Celtic Promise and rind-washing here.) Amongst other accolades, Celtic Promise is one of only two British cheeses to have been awarded the title of ‘Supreme Champion’ twice at the British Cheese Awards.

In a nod to the Scottish side of his ancestry, John has also built a distillery on his farm, which he was kind enough to take me (a gin fiend) around. The Dà Mhìle Distillery makes an orange liqueur, a botanical gin, a seaweed gin and is about to launch the first organic Welsh whisky to be made in centuries.

I came away from Glynhynod with some original Teifi, a bottle of seaweed gin and the feeling that I had missed my vocation by not choosing to found a cheese-and-gin farm. The original Teifi was sweet with grassy notes, in contrast to a more mature version I have also eaten which had hints of Mocha coffee. I later tracked down some Teifis with seaweed and nettle for comparison; the seaweed was good but it was the nettle I found really interesting. I read something recently about how some flavours when added can really bring out subtleties in a cheese and the nettles seemed to bring out the herbal and slightly spicy notes of the Teifi. As varieties of ‘cheese with bits in’ go, this is a world away from cheese with added Christmas dinner or baked beans. 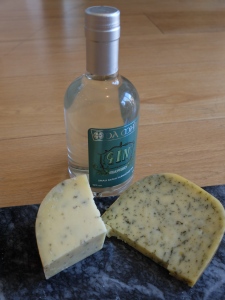 Gin and cheese…well, it is Friday…

With thanks to John for being so generous with his time and enthusiasm. If you’re ever in West Wales and a fan of spirits or cheese, Caws Teifi is a must.

12 responses to “A Visit to Caws Teifi”