One of the lovely things about writing about British produce is that you get to learn about new areas of the British Isles which sound rather appealing. And so it is that we’ll be spending half the Easter holidays in west Wales, partly because it sounds like a peaceful idyll full of pristine beaches and rivers packed with jumping fish and partly because it’s been described as ‘the Loire of Welsh cheesemaking’. And whereas some cheesemakers (somewhat understandably) say on their website ‘don’t come and visit us, we’re too busy making cheese’, these Welsh cheesemakers are all like: ‘Please come and visit us – we’d love to see you!’ and ‘Drop by, see us in action and taste our cheese!’ Well, don’t mind if I do…but first this week’s suitably Welsh cheese: 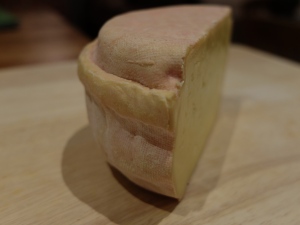 Celtic Promise is an unpasteurised, cow’s milk, washed rind cheese produced by Caws Teifi on Glynhynod Farm in Ceredigion, South Wales. Except – is it? A washed rind cheese, that is? It certainly seemed to fit the bill: lots of websites called it a washed rind cheese; it had an orange sticky rind; and it smelled a bit, well, high. But then I read on a cheesemonger’s website, referring to the man who invented it that ‘the technique he uses is called ‘smear ripening’ as opposed to rind washing.’ What?! There’s a difference? Well, this is news…

So, off I set on a quest to find out what distinguishes rind-washing from smear-ripening (which is one of the strangest sentences I have ever written). Given that Celtic Promise had originally been developed by the late James Aldridge, pioneer of stinky cheeses and known as Britain’s first affineur, I headed for his webpages first. And, sure enough, there it was: ‘Although the soft, orange rind, cheeses are generally referred to as being of the washed-rind variety, the term “washed-rind” should correctly be applied to the firmer, lower moisture, alpine cheeses: Beaufort, Gruyere, Appensaller, Tomme d’Adondance etc, and Fontina, from the Pyrenees and, although this may be seen as an exception at first sight, to the old Goudas of Holland.’ Oh blimey, so not the stinky orange cheeses then, there’s a turn up for the books.

In a nutshell, cheeses like Gruyere that originated up a mountain had to keep for a long time so tended to be lower in moisture whereas cheeses that were made down below, like Muenster, sold faster so could be softer and higher in moisture. The surface of the mountain cheeses was washed (‘rind-washed’) to restrict mould growth and they tended to form a hard rind. In contrast, the further you went down the mountain, the higher the moisture content and so cheeses like Reblochon were still ‘rind-washed’ but because they were softer, more bacteria grew – hence the stinkiness. Down on the plains, many of the French cheeses owed their origins to the monasteries; to reduce contamination in their soft cheeses, they washed – ‘smeared’ – them in alcohol. This frequent ‘smear-ripening’ encouraged bacterial growth and so, in contrast to the Alpine cheeses, they developed the familiar sticky, orange rind. Apparently, the terms are used pretty much interchangeably these days and even Aldridge declared, ‘Not that I would be pedantic about it.’ But now you know. I’ll be testing you all regularly.

And the Celtic Promise? Well, it’s made by John and Patrice Savage-Ontswedder in collaboration with a recipe invented by Aldridge. The Teifi cheesemakers also make the delicious Gouda-style cheese Teifi, which I’ve written about and salivated over before. Celtic Promise starts life as a Caerphilly type of cheese but is then washed (smeared?!) in cider brine twice a week for seven weeks. The result is a cheese with a terrifying outside, peach-orange and stinky but a buttery, rich interior with a slight bite but nothing that peels the roof of your mouth off. Smeared or washed, ripened or rind-y, it’s certainly a tasty Welsh morsel – as evidenced by the approval of my stinky-cheese-hating Other Half who appeared to scoff most of it.