Eek, it’s been quite a while since my last post but, in my defence, I have been on some intrepid cheese travels, exploring the beautiful coast and valleys of West Wales and eating rather a lot of local cheese along the way. More of that soon but first I bring you Y-Fenni, a little number I picked up in a deli in the pastel-pretty seaside village of Aberaeron: 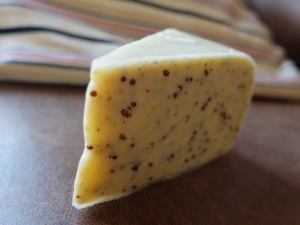 Y-Fenni is a pasteurised, hard, cow’s milk cheese, made by Abergavenny Fine Foods in Blaenavon. Named after the Welsh for Abergavenny, Y-Fenni is a mature cheddar blended with mustard seeds and ale. Abergavenny Fine Foods is quite a large outfit these days, supplying Pant-Ys-Gawn goat’s cheese to many supermarkets but their story only starts in 1981 when Pam and Tony Craske moved to Wales in search of the good life. Tony was dispatched to market to buy a cow but instead returned with six goats. With a surplus of milk and only a library book about cheesemaking, the seeds of the business were sown.

I wanted to try this cheese because I’ve often seen it recommended by cheesemongers even though a) it’s a ‘cheese with bits in’; and b) it’s made in a creamery rather than by an artisan outfit in the middle of nowhere, both of which cheesemongers often tend to shun. I was also interested by its flavours, suggesting as they do the classic ingredients for Welsh Rarebit, which I’ve been researching recently. It turns out that what I thought was essentially a pimped-up cheese on toast taps into a long Welsh love affair and also gets a bit controversial.

The Welsh have had a reputation for loving cheese, and especially toasted cheese (or ‘caws pobi’) since medieval times; in the sixteenth century, Andrew Boorde wrote that God was fed up with all the noisy Welshmen in heaven and so St Peter lured them all out by shouting ‘caws pobi!’ and then locked the door. The first known reference to the name ‘Welsh Rabbit’ is in 1725 and there are suggestions that the name may come from a xenophobic English joke about the Welsh being so poor they couldn’t even afford free rabbit. It was only later that Rabbit became Rarebit, perhaps out of confusion or even an attempt to gentrify the name. But Rabbit, Rarebit or Caws Pobi, the dish remains popular and I ate a rather nice one made with Gorwydd Caerphilly and Welsh Cheddar on the banks of the River Teifi.

And Y-Fenni? Well, the smell is overwhelmingly of mustard seeds and the texture is supple. I’m the first to admit I can be a snob about cheese with bits in (flavoured with fruit, chocolate, baked beans and Christmas dinner – no thank you) but on my cheese travels I’ve discovered some rather nice ones (Posbury for example) and it has to be said that Y-Fenni is ridiculously moreish. The cheddar is creamy and moist and the mustard seeds tangy and a little spicy. It’s a nibbling cheese and most of all, I can confirm, a toasting cheese.