Earlier this week I had my fifteen minutes of fame on a radio show called The Dirt, which focuses on gardening and food. Should you be at a very loose end and wish to hear me wittering on about disastrous home-cheesemaking and how people should be able to eat nasty cheese if that’s what they like (fence-sitter, moi?) then you can find it here. I turn up about three quarters of the way through. One of the topics we got on to was ‘cheese with bits in’ and I did at this point declare that I am, on the whole, not a fan. All of which leads me neatly on to this week’s cheese, Posbury. My slab of Posbury was kindly sent to me by a friend who tried it, liked it and thought I might too. My initial thought was ‘Eeek, cheese with bits in!’ So, here it is: Posbury, pre-nibble, with its bitty-bits glittering at me evilly: 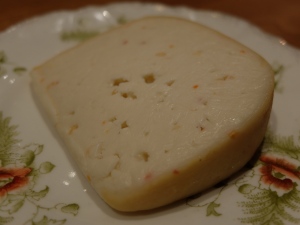 Posbury is a semi-hard, unpasteurised, goat’s milk cheese, produced by Dave and Marilyn Johnson at the Norsworthy Dairy near Crediton, Devon, which looks towards the slopes of Exmoor. Dave, originally from Durham, started out as a relief cowman who milked other people’s herds. They first started keeping goats in 1999, starting out with 40 day-old kids. A year later and they were selling the milk to specialist yoghurt and cheesemakers and expanded their herd to 90 goats. Finding a market for their winter milk was relatively easy but then the country was rocked by foot-and-mouth disease and farming ground to a halt.

Fortunately their herd didn’t contract the virus but it wasn’t until 2002 that they found a cheesemaker who would take their milk all year round. Based in North Devon, the cheesemaker was a Dutch lady called Vera and the first cheeses she developed with their milk used the ‘washed curd’ method which is characteristic of Dutch cheeses and involves removing some of the whey and replacing it with hot water – literally ‘washing’ the curds. Vera retired in 2006 and Dave and Marilyn have been making the cheeses ever since.

And the bits? Well, Posbury is a goat’s cheese which contains garlic, onion, horseradish and paprika. Did I mention I’m not keen on cheese with bits in? I’m not a fan of cheese with fruity bits, chilli bits, boozy bits and in particular – without even trying it and I never will – I am not a fan of turkey-flavoured cheddar flecked with sprouts, grated carrot and dried fruit (I’m not making this up – go on, Google it and try not to be sick in your own mouth). Does this make me a cheese snob? No, I don’t think so. I’m not saying that any of these cheeses taste bad just that I would rather taste cheese when I’m eating cheese. I feel the same about chocolate with bits in (especially wasabi chocolate which I did try and was actually as revolting as it sounds).

Cheese with bits in (or ‘flavour-added’ cheese as it’s called in the industry) is not a new thing. The Romans added herbs, spices and nuts to their cheeses and here in England there’s a long tradition of cheese being flavoured – sage, nutmeg, rosewater, celery, garlic, tarragon, mint, basil and caraway seeds were all used in times gone by, as were colourings that ranged from carrot juice to cochineal. But I digress…how was the Posbury? Well, I was pleasantly surprised. The added flavours were very subtle, even the garlic which could have been overpowering. I could still taste the cheese, which had a slight goatiness to it and a lovely texture, springy and buttery. It was a cheesy cheese that had been enhanced by bitty bits. And from a bitty-cheese-hater, that’s a compliment indeed.

With additional research from The Cheese Shed and Farmers Guardian.