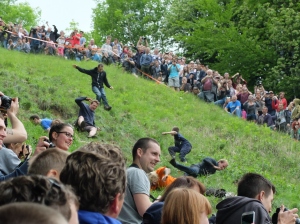 I grew up in the sort of place where young men were not afraid to Morris Dance. Similarly somewhere, in the forgotten bowels of local press archives, there may be a photograph of me dressed as a Victorian wench, holding a scabby old stuffed monkey. If there was a local tradition that involved dressed up strangely and behaving oddly, we were all out on the streets like moths to the proverbial flame. So I was almost tempted by the annual cheese-rolling extravaganza at Cooper’s Hill in Gloucestershire. Rolling down a grassy slope whilst probably under the influence of alcohol? Oh yeah, been there, done that.

The origins of the cheese-rolling are lost in the mists of time. It can be traced with certainty to the eighteenth century but some believe the tradition may be prehistoric in origin. Some link it with a Middle Eastern tribe, the Phoenicians, who sailed to the southwest coast in about 1200BC and were known to have a predilection for pushing burning wheels down hills (and possibly burning wicker cages full of virgins although no-one seems keen to uphold that particular tradition). Others have linked it with a ceremony to protect common grazing rights. No-one knows quite when the cheeses became involved although it’s been suggested that they represented the sun. Whatever the truth, it’s become a fiercely-guarded tradition, ostensibly for local people but which now draws lemmings from all over the globe.

The start of the walk to the Hill was much like any other summer jaunt through tangles of wildflowers and alongside fields of green spiky wheat. The difference being that we were part of a long winding snake of about 5,000 other people. And fairly soon things began to take a strange turn. 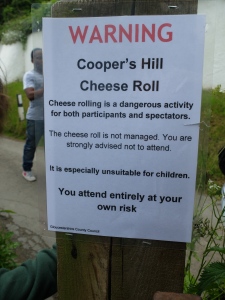 Not quite the tourist’s welcome I was hoping for but then this isn’t one of those events where the police do congas and there are hot dog stalls and people selling glow-sticks. There used to be an official organising committee but safety fears from various authorities meant that things went underground – there’s no chance of anyone insuring such a crazy event. In 2013, the media was full of stories about how the police had warned that anyone connected with the event could be held liable, as a result of which Diana Smart, the octogenarian cheese-maker who traditionally supplies the Double Gloucester cheeses, pulled out and a fake cheese had to be used. This year the cheeses were real once more but roads had been closed for up to a two-mile radius.

If I was still harbouring any ambitions about taking part, the first glimpse of the hill began to persuade me otherwise; various expletives and murmurs of ‘Oh God, LOOK AT IT!’ passed through the crowd. This is almost the most authentic view, that really shows how steep it is, as if it’s almost hanging from the sky. Cooper’s Hill is in the top right-hand corner.

By the time we reached the hill, both sides were starting to fill up behind the orange tape that served as crowd control. It’s hard enough to stand on the slope without even thinking about running up it or hurling yourself down it. The crowd was full of different accents, from America to Japan, Spain to Australia, all eating sandwiches cheerfully and trying to keep their footing. At one point there was a Mexican Wave. And then it was time for the first race.

ONE to be ready…TWO to be steady…THREE to prepare and FOUR to be off.
The cheese is thrown down first. It’s a Double Gloucester, about the size of a dinner plate and weighing three kilos. ‘Please watch out for the cheese,’ says the disembodied voice on the public announcement system. ‘Never mind the sodding cheese,’ says the Liverpudlian next to me. ‘It’s the fourteen stone man behind it you want to worry about.’

The men set to follow the cheese cast aside their cider flagons and launch themselves off the top of the hill. (‘It’s not a hill, it’s a cliff’ a competitor told me later as he re-joined the crowd.) Only a few yards down, they are already a tangle of limbs, some tumbling, others flailing and a few strategic sorts still on their feet. It’s not just the gradient of the hill, rumoured to be 2:1 and even 1:1 in places, that catches them out. This isn’t a picnicker’s grassy knoll; it’s a pock-marked, mole-hilled horror of a hill, covered in random tufts of vegetation and hidden holes just waiting for the unsuspecting ankle. In the photo below you can just make out the cheese between the two camera phones. 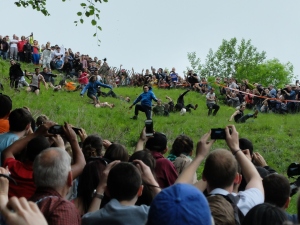 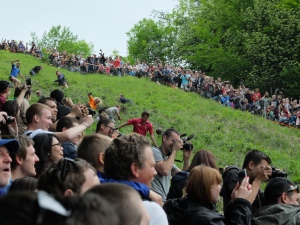 The bottom of the hill is flanked by local rugby players who ‘catch’ participants so that the momentum doesn’t see them squashed like flies on the fences at the bottom. They also help to attend to any casualties (this chap was just winded and got up a couple of minutes later, much to the disappointment of the assembled media who were hoping for some gore). 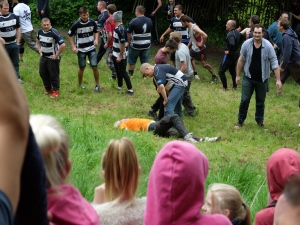 It’s over in a flash and the winner is a local man, Josh Shepherd, who later declares that he’s ‘really happy…but doesn’t really like cheese.’

More races follow in a similar vein, a blur of arms and legs, a tumble of torso or a staggering that sometimes resembles a speeded-up zombie flick. 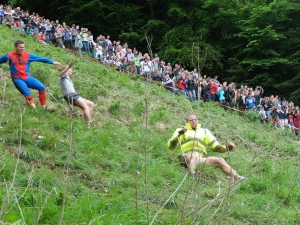 And then it was over, cheeses seized, honour won or lost and family rivalries settled. A couple of broken bones were reported but otherwise, for such a lunatic endeavour, people seemed in good shape. Despite the global gathering, three out of four of the winners were local people, from the nearby town of Brockworth, which felt quite fitting for a tradition that for hundreds if not thousands of years was probably unknown outside of the county. (You also have to wonder if a few of them hadn’t been sneaking up in the dead of night, making a note of the worst holes and hillocks. I even read about one previous local champion who used to study videos of the race to work out his tactics.) This is serious stuff.

No doubt next year there will be attempts to ban it or make it so difficult to continue that it becomes impossible. But so far, in its history, only the national outbreak of Foot and Mouth Disease has seen it abandoned entirely. Traditions are a strange old thing: seemingly pointless and ridiculous but fiercely guarded. As multiple champion Chris Anderson was quoted as saying in 2010: ‘It’s just tradition and for me it’s hard to stay away.’

And no, I did not take part. And equally no, you will never see that picture of me dressed in a mob cap and holding a monkey, although I reserve the right to do so again one day in the name of tradition…

21 responses to “Cheese-Rolling on Cooper’s Hill”