It’s coming up to the first anniversary of Fromage Homage. Just as I set out to do, I’ve tried a different cheese (nearly) every week and found out how and where they were made. I’d still place myself firmly in the fancier’s camp rather than connoisseur’s corner but I’ve moved on from this time last year when I couldn’t tell a Stilton from a Roquefort or a Stinking Bishop from a Brie. I can at least now taste a cheese and have a bash at which animal it came from and whether it’s a washed rind or a hard territorial. But there’s always one waiting to catch me out and so it was with this week’s cheese. It is a downright enigma. So here is Brinkburn, the Mona Lisa’s smile of cheeses, the crop circle of fromage: 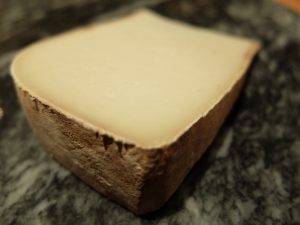