I once met someone who told me that his friend had written her dissertation about cheese names. It might sound a bit daft and perhaps the sort of thing that would trigger a spluttering Daily Mail article about the pointlessness of academia. But, actually, I think it sounds quite interesting. Cheese names can often tell an informative or evocative story. They can be geographical (Fosse Way Fleece, Parlick Fell), historical (Edmund Tew, Howard) or even linguistic (Norfolk Mardler, Mouth Almighty). I had heard about Yorkshire Fettle precisely because of how it came by its name but hadn’t managed to track any down, so was chuffed when Aldi sent me some to try as part of their new range: 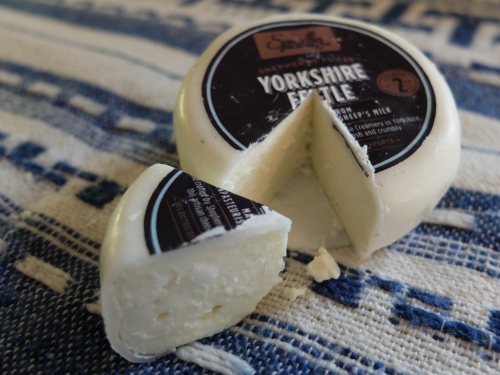 Yorkshire Fettle is a soft, pasteurised ewe’s milk cheese made by Shepherd’s Purse, who are based in Thirsk, North Yorkshire. The business was started 30 years ago by qualified pharmacist and farmer’s wife, Judy Bell. Whilst working for an osteopath, she had noticed how many clients had cow’s milk intolerance and began to wonder about the potential for sheep’s milk products. Back in the late 1980s, sheep’s milk cheeses were virtually unheard of in the UK but Judy persevered, researching breeds and cheese-making.

The first cheese that Judy produced, in 1987, was a salad-style, salty ewe’s milk cheese and she called it Yorkshire feta. In 2002, however, Greece gained PDO status for feta, meaning that only brined sheep/goat’s milk cheese made in Greece could be called feta. A legal battle rumbled on, chiefly led by Denmark and Germany, who claimed that it had been produced for so long, by so many countries, that ‘feta’ had become a generic term, much like ‘Cheddar’. In 2005, though, an appeal ruled in favour of the Greeks and, in 2007, (accompanied by an inevitable rash of headlines about her being ‘cheesed off’) Judy renamed her cheese ‘Yorkshire Fine Fettle’ (for those not familiar with the term, to be ‘in fine fettle’ means to be in good health or good spirits).

The cheese is made from fresh sheep’s milk and hand-salted, rather than brined. It’s then waxed and matured for a minimum of two weeks. The texture is crumbly but soft. Taste-wise, the salt is there but it doesn’t take the roof of your mouth off like some fetas. It has the lovely lemony-biscuit taste unique to ewe’s milk cheese and, again, has a much more rounded flavour than most fetas that make their way to the UK. I’ll probably provoke Greek fury but I prefer this cheese to feta; it’s eminently more snackable and you could comfortably put it on a cheeseboard. Definitely worth keeping an eye out for on your next shopping trip.