As part of last Friday’s goat’s cheese paean in honour of Chinese New Year I promised you a ewe’s milk cheese to redress the balance for those who thought we were now entering the Year of the Sheep instead. And, as fate would have it, the lovely folks at online artisan cheese emporium The Cheese Market very kindly sent me a very delicious example of the type indeed. So here, in all its gooey orange loveliness, is Nuns of Caen: 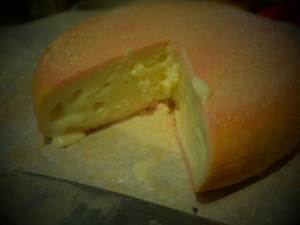 Nuns of Caen is an unpasteurised, ewe’s milk soft cheese made by Charles Martell & Son of Laurel Farm in Dymock, Gloucestershire. Those of you who have been paying attention may well recognise the name, as Charles is responsible for previous Fromage Friday grandees Stinking Bishop and Single Gloucester PDO. Feted as one of the saviours of the Gloucester cattle breed, he is also responsible for reviving and keeping alive some of the varieties of pear, plum and apple trees which used to fill the county but were on the verge of extinction. As well as his cows and sheep, he now also maintains orchards growing 100 varieties of apple and 70 of perry pear.

‘So what?’ I hear you cry. ‘I didn’t log on in my precious coffee break to read about seeded fruit – bring me the flippin’ cheese!’ Well, turns out the fruit trees are integral to Charles’s cheese production. Having discovered that one of his buildings was actually a sixteenth century distillery, he set about producing the local grog once more: cider, perry (pear cider) and other assorted fruity delicacies. The infamous Stinking Bishop is made by bathing the cheese in perry made from a pear of the same name. And this week’s cheese Nuns of Caen has a boozy story all of its own.

In the thirteenth century nuns from Caen in Normandy settled in the south of Gloucestershire, after William the Conqueror had earlier re-appropriated the manor from its then lord and given it to the French nuns. The old English name for nun is ‘Minchin’ and so the place became today’s Minchinhampton. By the start of the next century the nuns are recorded as having 1,886 sheep, some of which they milked for cheese. The recipe for this cheese is thought to originate from the nuns and, being of monastic origin, it’s a washed rind cheese. Monks and nuns were big cheesemakers and also tended to brew too. They would often wash the cheeses in the sterile alcohol but then found that it gave the cheese a somewhat meaty flavour which was rather a bonus seeing that every day in three was a fast day when they couldn’t eat meat. As one writer puts it: ‘Fast-days in the Middle Ages forced the Church’s greatest minds to invent ways to make eggs and cheese taste like roast veal.’

Nuns of Caen (the cheese, not the ecclesiastical ladies) is washed in Owler, a pear spirit distilled on the farm and named after an old local word for smuggler. It’s matured for 6-8 weeks, during which time it develops the distinctive sticky orange rind as the Brevibacterium linens bacteria does its work (and as ever at this point I would remind you that it’s B. linen’s cousin B. epidermis that lives between your toes and makes your feet smell cheesy too).The cheese is then wrapped in lined paper which has a fritillary on the label. This is because a local farmer said that the nuns had deliberately introduced them to the Gloucestershire pastures as they gave a particular flavour to the cheese. It’s very pretty – look: 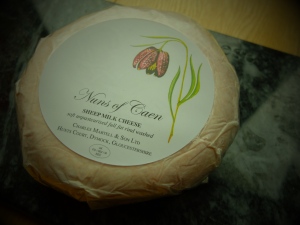 Being of the washed rind variety, this is not a cheese that you want to leave in your car boot at Heathrow whilst you go away for the weekend (true story: it took nine valet attempts to get shot of the smell apparently). It’s orange and sticky and stinky. But as with most washed rind cheeses, once you get past the exterior, the paste inside is a different matter. It’s ridiculously creamy and coats your mouth wonderfully. It’s sweet and grassy and slightly meaty but without the afterburn pungency that some washed rinds have. I couldn’t detect either pear or the lanolin taste that some sheep’s cheeses have, and equally my palate isn’t fine-tuned enough to get the hints of white chocolate that one top cheese retailer talks about. But it’s certainly a mighty fine cheese. It’s also huge so expect a stinky cheese recipe coming your way soon.

With many thanks to The Cheese Market who sent me a Nuns of Caen cheese to review.

15 responses to “Nuns of Caen”