Never fear, Halloween haters, it’s safe to come out for another year. Love it or hate it, it’s undeniable that the surge in spooky celebrations has been a boon for pumpkin farmers. Every year, we enter the fiercely competitive Tooting Common Pumpkin Carving Competition and even managed to score a second prize last year with the scary fellow above. This year – allotment smugness alert – we managed to grow our own. I would love to take credit for their vastness by claiming that I’d administered secret potions or performed arcane fertility rites but, in reality, I forgot what I’d planted and only discovered them when we returned from a fortnight’s holiday.

They are a French heirloom variety called Rouge Vif D’Etamps and, compared to the supermarket pumpkins, there was a huge amount of flesh leftover once we’d carved them out. Many pumpkin recipes that you come across call for tinned puree but I didn’t want to waste the pile of innards that we’d accumulated so decided to incorporate them into a macaroni cheese dish, using a suitably colour-co-ordinated Double Gloucester cheese, made by Dewlays in Lancashire, and part of Aldi’s new range of British cheeses. 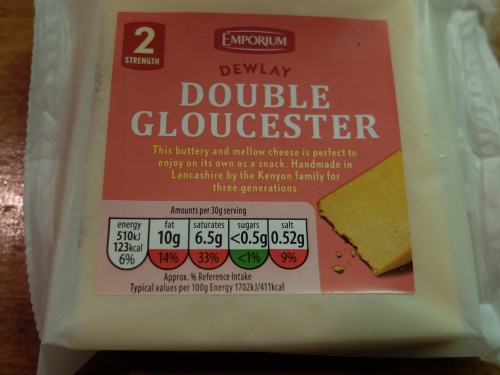 Unlike Single Gloucester, which has PDO status and can therefore only be made in Gloucestershire, Double Gloucester can be produced anywhere. Single Gloucester cheeses were traditionally made from partially-skimmed milk, whereas Double used full cream. As a result, Single cheeses were often consumed at home by farmers, whereas the richer Doubles were matured and made it further afield, to be sold in the urban markets. Double Gloucesters were also one of the first British cheeses to use colouring, a practice which continues today, with the addition of a small amount of annatto. I’m a fan of Double Gloucester; it has a lovely buttery quality to it and it makes for a suitably autumnal cheese to pair with pumpkin. This quantity will serve 4-6, depending on greed.

500g pumpkin flesh, with no seeds or rind

Salt and pepper, to season

Most recipes for pumpkin ask you to roast it in nice little chunks but that doesn’t really work when you have a mountain of ragged pumpkin intestines in all shapes and sizes and so I decided to sauté mine into a puree instead.

Heat the oil and butter in a large pan and throw in the pumpkin, garlic and sage. Cook for about 15-20 minutes until the pumpkin is soft and mashes up easily with the back of a wooden spoon.

Meanwhile, put the macaroni on to cook and make the cheese sauce. Melt the butter in a saucepan, add the flour and stir to make a doughy paste. Add the milk a little at a time, stirring or whisking constantly, until you have a smooth sauce. Add the cheese and stir through until melted.

Drain the cooked macaroni and pour it into a large baking dish. Season the cheese sauce, check for cheesiness and add the pumpkin mixture to it, stirring to combine. Pour it on top of the macaroni and stir it all together well. Sprinkle the breadcrumbs and chopped chestnuts on the top and bake in a pre-heated oven at 200/180 fan-assisted/Gas Mark 6 for about 20 minutes.

‘And this year’s pumpkin competition?’ I hear you all ask. Well, the boys took charge with this one and created a rather magnificent ‘seed mine’, using all the bits of Lego that are usually lying around waiting to cripple me. I am biased but I think it’s rather a creative masterpiece. Alas, the judges did not agree. We wuz robbed.

My freebie disclaimer: This cheese sample was sent to me by Aldi. I have not received any payment for this post, and the views expressed are mine, all mine.