So much news to pack into one post! Where to begin? Okay, a confession: I bought a spiralizer. Yes, yes, I know, no doubt it will soon be relegated to the spot above the washing machine, along with the pasta machine and the bread-maker. In the meantime, though, I’m having fun with it. 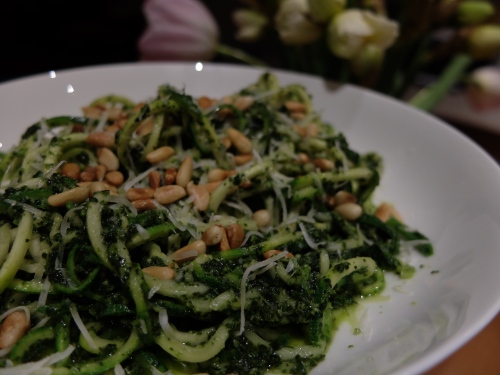 The second piece of news feeds into the first: I’ve had an allotment upgrade. My new plot is scarily huge but I’m already germinating a huge range of cucurbits to cover the space. I will then obviously need the spiralizer to cope with the courgette-squash-pumpkin glut. See? It’s a canny investment. (Yes, I realise my plot looks a bit like a police forensics tent at the moment).

Finally, I spent a week in Devon recently, which meant I could try all kinds of Devonish cheeses that are all but impossible to find outside of the county. More on those soon but this recipe, rather neatly, brings together my new gadget, some home-grown Cavolo Nero and a hard, ewe’s milk cheese from Devon called Sheeps’ Tor. Produced exclusively for the shop Country Cheeses, which has a branch in Tavistock near where we were staying, it’s a hard, aged cheese. I can’t tell you much about it, other than the lady who sold it to me said it was made in Somerset. If I was a betting woman, I’d put my money on the cheese-maker being The Somerset Cheese Company, who make a range of cheeses including Fosseway Fleece and Pendragon Buffalo. Anyway, it’s a bit like a Pecorino, so I thought it would go down very well in a pesto.

200g of Cavolo Nero, shredded from the stalk

20g pine nuts, toasted, plus a handful extra for garnish

My Cavolo Nero wasn’t too tough but if yours has grown to the size of a small palm tree, you might want to blanch the leaves first for a couple of minutes. Then pop all of the ingredients into a food processor and whizz the lot up, adding the garlic clove a bit at a time to get the taste you like. You will need a good couple of tablespoons of olive oil to get the right consistency. At this point it will all taste a bit earthy and virtuous but fear not…put it all in a frying pan and gently heat it for about five minutes. 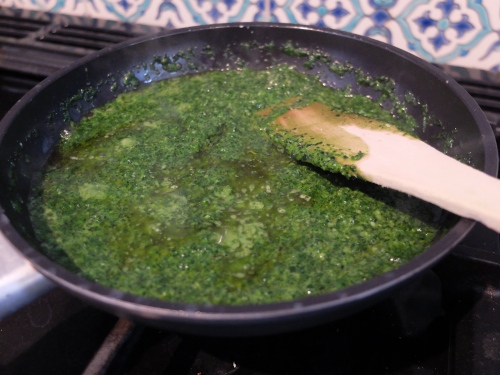 The garlic and Cavolo Nero will cook and the cheese will melt. Serve over spiralized courgette (or proper pasta if the thought of spiralizing anything makes your teeth itch).