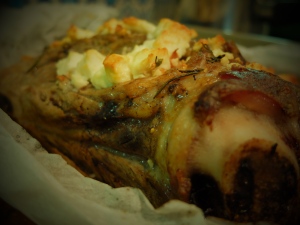 I’m afraid this recipe doesn’t feature British cheese and that this time I didn’t make the feta myself (although after last year’s home-made feta slime-fest I think my family are probably quite glad). I was going to write a very exciting cheese post but under-estimated how long that particular ‘recipe’ would take to reach its conclusion, so instead I bring you what I had for Sunday lunch: Kleftiko, slow-cooked for five hours with feta cheese.

Now, I’m always a bit scared of posting classic recipes on here for fear of the online beating I may get; everyone has their own take on recipes, sometimes handed down through the generations and sometimes memorised from a yellowing copy of Good Housekeeping in 1978 and NOTHING ELSE WILL DO. My favourite comment on my blog so far was when I made and posted a version of Bajan Macaroni Pie and, although I explicitly stated that I was well aware that everyone had their own version and that various ingredients were hotly debated, someone still kindly took the time to tell me in no uncertain terms everything that I’d done wrong (which was everything) and comment that the topping ‘looks like a yeast infection’ (you’re obviously more familiar with them than me, love…)

Apparently ‘Kleftiko’ is Greek for ‘stolen meat’ and the story is that it would be a dish made by bandits who would steal a lamb and then cook it for a long time, sealed with mud in a hole underground so that no-one would suspect anything. So, here is my version of Kleftiko and very nice it was too. And yes, I know that your Gran from Skopelos would never have used cinnamon and that I have cooked it for too long/not long enough/not in the ground in the back garden. And I’ve probably used the wrong herbs or the wrong cheese or the wrong cut of meat. And I’m not really a bandit. But look, it tasted good. So there.

In fact, blame this chap because I used his recipe as a starting point. Go and pick on him instead.

Olive oil, for frying and general drizzlage
4kg lamb shoulder, bone in
16 cloves of garlic, peeled and crushed
A handful of herbs such as oregano, thyme or rosemary (I used whatever I could find lurking in the garden at this time of year)
Juice of 6 lemons
1 tsp ground cinnamon
200g feta cheese, crumbled into chunks

Preheat the oven to 140°C/120˚C fan-assisted/Gas Mark 1. Rub olive oil all over the meat and season with salt and pepper, then seal it on all sides in a hot pan. 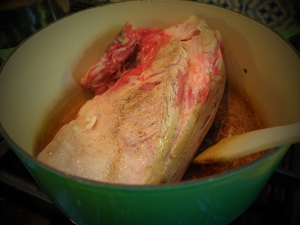 Put a long piece of baking paper in a roasting tray, so that it hangs over the edges (I used more than double the size of the tray). Put the lamb, garlic, herbs and lemon in the middle of the paper and sprinkle the cinnamon over. 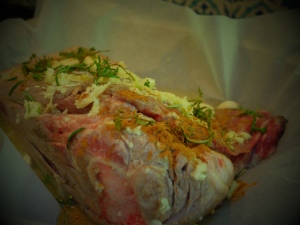 Seal the baking paper around the edges, scrunching it up to make a parcel. 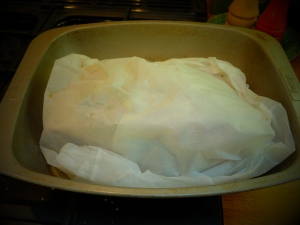 Roast the meat for 4½ hours. After this time, open up the parcel and scatter over the feta chunks. 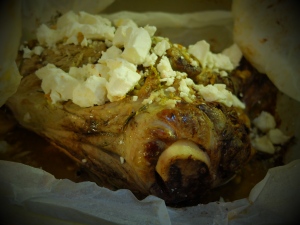 Baste with the meat juices and cook for 20 minutes more. The meat will be gloriously tender and the lemony-garlicky juice with chunks of feta in makes the perfect sauce. 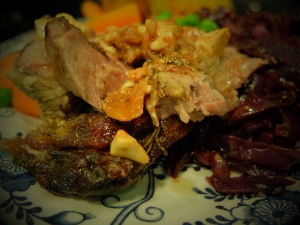