Home-made Feta Cheese (or Fetter Cheese, as it shall be legally known)

So, this Feta sort of started off as halloumi. I found a recipe for halloumi and bought myself a few pints of unpasteurised milk. I was looking forward to some nice squeaky halloumi.

However, as anyone who has followed my previous cheese-making adventures will know, I’m actually not very good at making cheese. I think I’m generally good at concentrating and fine details but the process of cheese-making takes things to a whole new level and seems to turn me into the world’s clumsiest fool. And so it was that, within the first few minutes, I dropped my thermometer and it looked like this:

I was aiming for a temperature of about 31˚C but having to guess which of the three readings was the correct one did not bode well and it soon became apparent that my thermometer was, using a technical term, totally buggered. Not wanting to waste the several litres of milk I’d already poured out, I forged on for a bit, gaining hope from cheese-making websites that said you could ‘guess as it’s a bit like body temperature’ (oh yes, because I’m really used to measuring that with my finger) and then came across one that said ‘you can use a human digital thermometer’. Excellent news! Scrabbling through a drawer I came across my children’s thermometer and, pausing only to consider when I’d last used it (answer: when the baby had Hand, Foot and Mouth which fortunately is very different to just Foot and Mouth), I sterilised it and got back to work.

But it seemed that the fates were against me. I warmed the milk, diligently added the rennet and waited for the curd to set. And waited. And waited. But even after a couple of hours, this ‘more than slightly resembling baby sick’ curd was the best I could get: 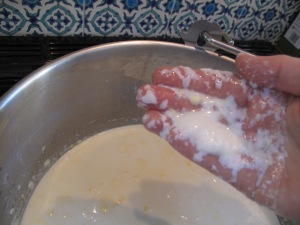 To cut a long story short, I drained off the whey anyway and pressed the cheese. But the quality of the curds had been so rubbish that I sort of lost heart and gave up on it. Within a day, I had a yellow hockey puck, which was useful for entertaining offspring in the long summer holidays but not so good for grilling. 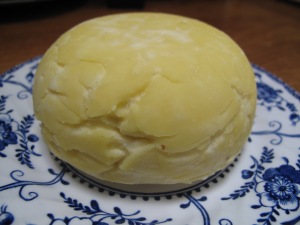 The halloumi dream was over. I had fallen out of love with halloumi so decided to make a rebound cheese. This month’s Cheese, Please! Challenge cheese is Feta so it seemed a natural choice. Feta is traditionally made with a mixture of sheep and goat’s milk but, despite the arid, mountainous nature of South London, sheep’s milk proved a little hard to come by so I settled for goat.

I used just two litres as I had lost a bit of confidence (plus the local shop only had three litres, one of which I found had already turned distinctly cheesy and not in a good way). I sterilised all of my equipment (including my spanking new non-baby-diseased thermometer) and got to work, warming the milk to 31˚C. At this point I added some of the culture that I originally made for my first Cheddar attempt, stirred well and left it to ripen for one hour. I then added rennet (about an eighth of a tablet which, believe me, was not easy to accurately cut), stirred well again and left the curd to set. The recipe suggested it would take about 30-40 minutes but it was more like an hour and an half (probably because I used pasteurised milk). Eventually, it looked like this was the best I was going to get:

So, better than the halloumi debacle but I still wasn’t happy with it. I did read something that declared goat’s milk curd to be softer than cow’s milk and so I clung to this with faint hope and cut the curd into half-inch pieces and let the curd rest for ten minutes. I then stirred it again and kept it at the same temperature for 45 minutes, stirring it every now and then. This released more whey:

I ladled the curds into a cheesecloth, knotted it and left it to drain over the sink (some recipes advise you to keep the whey for later storage but I only found this after mine had all become the property of Thames Water so hey-ho, never mind). 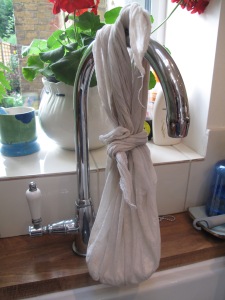 And then the magic bit! After three hours, I untied the cheesecloth to find… 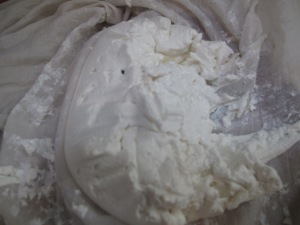 Perhaps my curds weren’t so bad after all. I carefully turned the ball over so the rough bits were now hanging at the bottom of the bag and re-hung it to drain for a further 24 hours. It’s hot over here in England at the moment and it’s fair to say that my kitchen was starting to smell somewhat goaty but apparently this was all to the good (assuming I barred all visitors to my stinking house). A day later and I unwrapped this:

Whenever I make a cheese that actually starts to resemble the cheese it’s supposed to be (rather than sports equipment or just plain mush) I always feel a little bit proud. But it was time for another moment of truth, to see if my Feta would withstand slicing up. I had to cut it into blocks and then put the blocks into a container (everything sterilised again) and cover all the surfaces with salt (no iodine).

The curd was still quite wet but held its own admirably. I waved goodbye (quite happily by now to the goaty stench that was starting to creep around the entire ground floor) and left the cheese in its box for three days, turning it each day. By the third day, the salt had drawn out quite a bit more whey and the cheese had firmed up nicely.

And so to the final step. I poured the whey into another sterilised container and arranged the cheese blocks in it. I then made a brine solution from 1 litre of water to 1oz of salt, dissolved the salt and poured it over to cover the cheese. It’s now living in the refrigerator for a couple of weeks to age. It looks like Feta and smells like Feta so the test will be the taste. Here it is, looking, I realise, like some sort of pickled brain from a Victorian freak show: 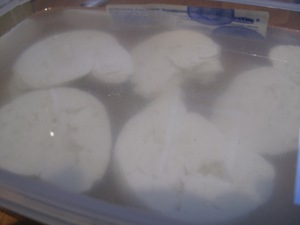 Of course, I can’t actually call it Feta, as to do so would be to risk the ire of an army of angry Greek farmers, waving the PDO status of their cheese at me, so threatened would they be by my industries. I used to work in a Fetter Lane, funnily enough writing about goats for a living, and so ‘Fetter’ it is. And, yes, I realise it still sounds like Feta. But hey, so sue me.*

*Please don’t sue me, thank you.

This is the recipe I adapted, using different quantities, goat’s milk, sea salt and tablet rennet.

I am entering this recipe into August’s Cheese, Please! Recipe Challenge.

This recipe is also posted on Punk Domestics.

29 responses to “Home-made Feta Cheese (or Fetter Cheese, as it shall be legally known)”