After I broke my Scottish cheese duck last week with Caboc, I’m on a roll as this week’s cheese also hails from north of the border (or The Borders, to be precise). But this week’s cheese could not be more different from last week’s. If Caboc is mild and inoffensive, the Balamory of Scottish cheese, Lanark Blue is – Scottish cliché alert – the Braveheart of cheeses. It’s fierce, blue and has certainly faced battle in its time.

So, here is Lanark Blue, seeking freedom from its foil: 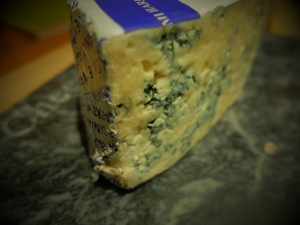 Lanark Blue is a blue, unpasteurised, ewe’s milk cheese, made originally by Humphrey Errington and now also by his daughter Selina on Walston Brahead Farm in South Lanarkshire, Scotland. Humphrey went off to university and worked in shipping before returning to Scotland and settling on the farm in 1982. To realise his dream of cheese-making and add value to his flock of Lacaune dairy sheep, he sought help from several cheese-makers and teachers and Lanark Blue went on sale in Scotland in 1985. A handmade cheese, produced in a farmhouse creamery, it was the first British ewe’s milk blue cheese for centuries. But a decade later, with the cheese perfected and a legion of fans buying it, the cheese was besieged by an enemy. Not mice. Not mites. Far worse: environmental health inspectors.

In 1994, Clydesdale Council claimed to have found listeria in a sample and condemned a tonne of the cheese, worth £60,000. All of his cheese was recalled and Errington ordered to stop selling it. He was told to expect many deaths and the story broke in the papers with the headline ‘Killer Cheese.’ But Errington started to get his own tests carried out; the majority found no listeria whilst a few found traces of a non-dangerous strain. He appealed against the decision and, after a year of fighting it out in the courts, he won. His supporters and fans of his cheese were so outraged by the case that they raised £37,000 towards the legal costs. Freedom for Lanark Blue!

The cheese is hand-made. Cultures – including the Penicillium roquefortii mould – are added to the milk and it’s gently warmed and stirred for an hour. Vegetarian rennet is used to set the curds; this takes less time with ewe’s milk than with cow’s milk. The curds are then cut horizontally and vertically to form small cubes and then left to ‘heal’, where the curds develop a thin film on the surface. The whey is drained away and the curds ladled into moulds and allowed to settle in a warm room. They are then turned five times in the afternoon to encourage the remaining whey to drain away, dry salted and placed on racks in a cooler room. Finally the cheese is pierced by hand with stainless steel rods to allow air to penetrate the cheeses and start the mould spreading. The cheese is turned twice a week or wrapped in foil if it’s to mature for longer.

The taste of the cheese is said to vary according to the seasons; it’s more creamy and medium-flavoured in the spring but becomes strong and fierce – one cheesemonger uses the word ‘wild’ and their own website quotes someone calling it a ‘kilt-lifter’ – in the winter. My slab was certainly on the feisty side. It tasted very like a Roquefort; creamy, almost fluid in places and slightly gritty in others and veined with flashes of blue and green that fizz on your palate. My Stilton-loving Other Half declared it ‘a bit much’ for him but I thought it was great, a really interesting cheese in both flavour and history.

With additional research from Food List, The Independent, Teddington Cheese and Cooks Info.