A Marbletree Cheeseboard and Belvoir Crumpets

I was feeling a bit put out the other week when someone ‘fed back’ to me that they thought the design of my blog was a bit awful and the photos were especially dreadful, partly because I always use the same plates. Now, don’t get me wrong, I concentrate on the writing and the cheese, I know I have the design skills of a mole in the dark and I still haven’t got a new camera after dropping mine a few weeks ago. So this feedback wasn’t a surprise. I even agreed. But still, you know, it hurt. So when I got an email from some nice people at a little company called Marbletree, asking if I would like to try out one of their cheeseboards, it seemed like very good timing. A nice new thing to show off the cheese on.

But then I started to feel all English about it. I don’t think of myself as a reviewer because who am I to pass judgement? I’m very much a novice at all this and I’m as interested in the history, culture and production of cheese as the taste. And also I hate the thought of being rude about anyone’s product. Just because I don’t fancy Thai Curry Stilton, there are plenty who’d love it. I’m not comfortable about being all snotty about something that someone does for a living. So I started waking up in the night, sweating, and subjecting my other half to these kind of ramblings: ‘What if I don’t like it? I can’t write that I don’t like it; that would be rude. But I can’t write that I do like it, if I don’t like it; that would be a lie. And I can’t say I don’t want it because then they’d think I don’t like it…’ After several of these nights, he stopped me with, ‘Seriously? It’s just a cheeseboard. I’m sure it’s a very nice cheeseboard but you are waaaay over-thinking this.’ And then locked me out of the room. So I said, yes please, that would be very nice, thank you very much.

So Marbletree sent me one of their marble cheeseboards and when it arrived they had engraved it with my name which made me go a bit wibbly, it was a very nice touch. Funnily enough, we don’t have a cheeseboard in the house – cheese doesn’t tend to last long around here – and I was worried it would be too big but I tried it out with a few cheeses and it was actually a really good size for three to five cheeses:

They also do them in a larger size and in heart shapes and in a cream marble colour, as well as in slate. They do lots of other nice kitchen items too so if, like me, you’re approaching the panic-buying stage of Christmas, go and have a look-see. As usual, my photography skills were looking a bit ropey at this point and so when I decided to cook up this recipe, I made another little arrangement to show it off . 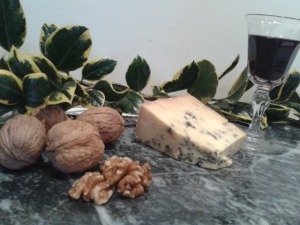 It’s rather classy, dontcha think? I was worried that marble would remind me of tombstones but like so many materials with multiple uses, I didn’t feel like that at all once I started using it. Thank you, Marbletree, I like it a lot and I’m sure it will be put to a great deal of good use – starting right here, as it shows off the ingredients for Belvoir Crumpets – Stilton, port and walnuts.

I first came across the recipe for Belvoir Crumpets a few months ago on the quirky and rather wonderful Foods of England website and thought it sounded perfect for Christmas. The reference to Belvoir comes from the Vale of Belvoir, an area of natural beauty on the borders of Nottinghamshire, Leicestershire and Lincolnshire, where most Stilton is traditionally made. It’s apparently pronounced ‘Beaver’ but ‘Beaver Crumpets’ just sounds very wrong and suspiciously like a line from seventies ‘comedy’ On The Buses, so it’s probably best to pretend I never told you that fact. I’m not sure if it’s a traditional recipe; there’s not much reference to it on the internet so perhaps someone made it up. Please correct me if I’m wrong and the good infants of the East Midlands have been weaned on it since time immemorial.

I decided to show off and make my own crumpets with a recipe adapted from The Hairy Bikers. I don’t have a crumpet ring and couldn’t find anything to improvise with (you can use a well-washed empty tuna can apparently) so I just put dollops into the frying pan gently. Technically, they are probably pikelets but I’m not sure ‘Beaver Pikelets’ sounds much better.

Warm the milk in a saucepan very gently until tepid. Sift the flours into a large bowl and stir in the yeast, salt and sugar until well combined. Make a well in the centre of the mixture and stir in the warm milk. Beat well with a wooden spoon for 3-4 minutes, or until the batter is thick and elastic. It will really look quite gunky at this point: 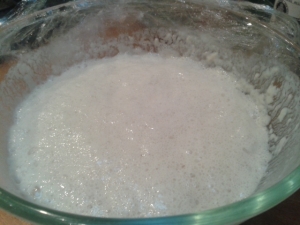 Heat a flat griddle pan or large heavy-based non-stick frying pan over a medium-high heat. If you’re using crumpets rings, you need to grease them well with butter, put them into the pan to warm and then spoon the batter in so that it comes up about 1.5cm up the sides of the ring. Or, like me, you can just carefully plop a tablespoon of the mixture into the pan. Cook until lots of tiny bubbles have risen to the surface and burst and the tops look dry and set and then flip the crumpets over with a spatula and cook on the other side for a further two minutes, or until golden-brown.

To make the rather splendid topping, for eight crumpets, combine 150g of crumbled Stilton cheese with 25g of butter with a fork. Add one tablespoon of port, one tablespoon of natural yoghurt and about eight broken walnuts. Mix it all together, grill one side of a crumpet and then spread the mixture on to the other side and heat it under the grill until it is hot and bubbling.

If there is a recipe more Christmassy and comforting than crumpets smothered in Stilton and port, I challenge you to find it. Happy Beaver Crumpeting!

My freebie disclaimer: I received a free Medium Marble Cheeseboard from Marbletree to review. I did not receive payment, and the views expressed are mine, all mine.

22 responses to “A Marbletree Cheeseboard and Belvoir Crumpets”