Last weekend saw us on a camping trip, as ever featuring limited sleep, the ever-present threat of rain and the usual one in ten odds of vomiting (it wasn’t us this time). In amongst this unalloyed pleasure, we also got to enjoy the beauty of the New Forest. Grazing ponies (and some donks with a deathwish), scrub and furze and babbling brooks, perfect for paddling. Striking and scenic but not, at first glance, obvious cheese country. However, this week’s cheese hails from just up the road from our buffeted tent: 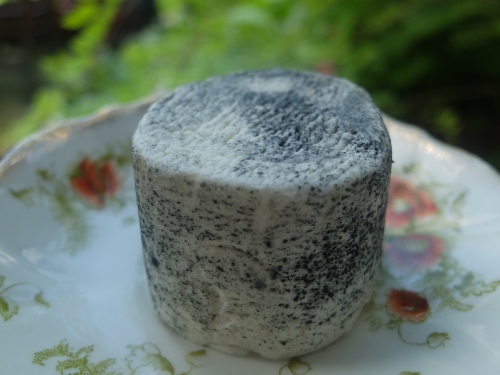 Rosary Goat’s Cheese is a pasteurised, soft, fresh goat’s cheese, produced by Chris and Claire Moody in the village of Landford, on the border of Hampshire and Wiltshire and just into the New Forest. For an area historically known for pig-farming (and wild boars, way back when), it’s now quite a cheesy place, with Old Winchester being produced not far away, as well as Old Sarum.

Neither Chris nor Claire was born into farming, having met at Southampton General Hospital where they worked, respectively, as a microbiologist and a chemist. Fancying themselves a shot at The Good Life, they moved into Chris’s mother’s house and started life as smallholders, raising pigs in the back garden. When the hogs didn’t prove profitable, they turned to goats, at first selling the milk then later producing cheese themselves. Having never visited France or tasted goat’s cheese, it took a cheesemaking course and six months of experimentation for them to produce a cheese that they believed they could take to market – this being the 1980s, a time when the great British consumer still deemed goat’s cheese to be fancy furrin food.

In the 1990s, as the business expanded, the Moodys had to let go of their goats and now buy their milk from a supplier instead. After pasteurisation, a starter is added, then vegetarian rennet. When the curd has formed, it is flushed into a trough, the whey is drained away and the resulting cheese is salted, shaped and wrapped in clingfilm. This version is coated in ash, as are many soft goat’s cheeses. The alkalinity of the ash helps to neutralize the natural acicidity of the cheese which can inhibit ripening, although these days it can be as much for the aesthetics.

The cheese itself is perfect for this time of year, with cheesemeister Charlie Turnbull declaring that ‘if sunshine were a cheese, it would be this one.’ Aged for a matter of days, it’s a little pincushion of fresh lemon mousse, with a slight tang and just a smatter of goat about it. Perfect for juicy tomatoes or fresh broad beans. And for the cheese-with-bits-in lovers amongst you, their version with garlic and herbs won the title of Supreme Champion at the British Cheese Awards in 2014. And the name? It comes from the rose garden that Chris’s grandmother made at the back of the house. A summer cheese indeed.