I find myself drawn to cheeses for different reasons: maybe because I want to try something from a new region; maybe because I just fancy a certain type of cheese; or sometimes for a random reason. In this case, I thought it had gorgeously striking packaging, so – boom – it was in the bag: 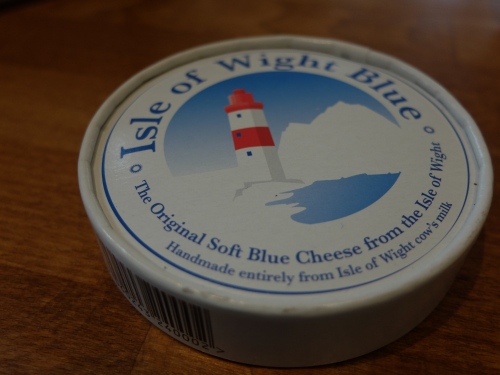 And just in case you wanted to see the cheese itself and its beautiful rind:

Isle of Wight Blue is a pasteurised, soft, cow’s milk cheese made by the Isle of Wight Cheese Company at Queen Bower Dairy in Sandown. The company was started in 2006 by Richard and Julie Hodgson who recognised a cheese gap on the island and set about trying to fill it. Following a stint at a cheesemaking school in Cheshire, they found a dairy farm with surplus milk and vacant barns and set up home there to make the Isle of Wight’s first cheese.

The dairy is based on a farm which has a herd of 85 Guernsey cows. Each morning the milk is pumped into the dairy and a starter culture is added, as well as the Penicillium Roqueforti which will produce the blue mould. The rennet follows and takes about an hour to coagulate the milk into a solid mass. The curd is then cut into small squares to release the whey and stirred every now and then for about 40 minutes before being tipped into moulds and left to drain overnight. The next day the cheese are hand-salted – unlike hard cheeses such as Cheddar, where salt is added at the curd stage. Finally the cheeses are rinsed and sent to a ripening room. A few days later they are pierced to allow oxygen to enter and start the mould growing inside, before being aged for 3-5 weeks.

The rind of the cheese is a beauty to behold, a mass of deep-blue patterns that look like ancient hieroglyphics. Inside, the paste is creamy and gooey with streaks of spiky blue. Buy it young and it’s a beginner’s blue but let it age and the blue is far more piquant, the creaminess more intense. It’s perfect for slicing like a small cheesy cake and then squashy-spreading onto crackers. Preferably, I imagine, whilst lying on an island beach looking at a blue sky, not watching bodkins of rain smash the grey London pavements. Ah well.

3 responses to “Isle of Wight Blue”