It’s not every day that you find a link between the name of a cheese and a British prime minister. (I tried very hard here to come up with some suitable puns but I’m afraid that Stilton Churchill, Anthony Edam and Gouda Brown was the best I could do. Apologies. I lay down the gauntlet for anyone to do better.) I stress that I didn’t buy this week’s cheese because of its connections to the Tory party, which would be a bit weird; I only discovered it afterwards. I bought it because it looked good and gooey, so here it is, looking a bit buttery and lovely: 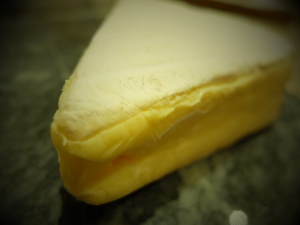 St Endellion is a pasteurised, soft, cow’s milk cheese made by Cornish Country Larder at Trevarrian in North Cornwall. The company was started in 1996 by John Gaylard, a local goat farmer, and his family when they began making a hard goat’s cheese called Village Green. Business boomed, they diversified into cow’s milk cheeses and in 2011 the company was bought by the co-operative Milk Link, which then merged with big player Arla Foods to create the largest dairy business in the UK. It’s therefore fair to say that this isn’t an artisan cheese, made in a converted cowshed by two or three cheese-makers. But it is, apparently, still traditionally made and ripened.

Brie is made with the addition of rennet and Penicillium camemberti spores. St Endellion is described as a ‘luxury’ brie as it’s made with the addition of Cornish double cream. The curd that’s produced is fragile and, instead of being cut, is ladled into moulds. The cheeses are drained for several hours before being flipped over and left overnight, without pressing. Finally they are dry-salted and left to mature. As it ripens the inside becomes softer and matures into a creamy paste, whilst the P. camemberti ensures that it grows a lovely white, furry coat. It certainly seems more creamy than your average brie; the inside was squidgy without a hint of chalkiness and tasted gorgeously of mushrooms and cabbages.

And the Prime Minister bit? Well, if you cast your mind back to the summer of 2010, you might remember SamCam going into early labour whilst on holiday in Cornwall. Their newborn daughter was named ‘Florence Rose Endellion’, presumably after the village they were staying in, rather than the cheese. Asda then sent samples of St Endellion cheese to the Tory party conference in what The Grocer magazine described as an act of ‘impeccable toadying’. A political cheese-post? Who’d have thought it?!