I was recently lucky to get the opportunity to be a cheese judge at the Global Cheese Awards (don’t worry; I was in a team of people with experience who knew what they were doing so any amateurism on my part was ironed out overall). It was fascinating and great fun too, although I haven’t been able to eat much cheese since after scoffing about 40 different types. Whilst I tried some cheeses that were lovely, some that were okay and one that was truly horrible, there was one in particular that wasn’t up for judging but which caught my eye for obvious reasons: camel cheese. Whilst I couldn’t buy any as very little was made, I did manage to snaffle some and here are some photos to prove it: 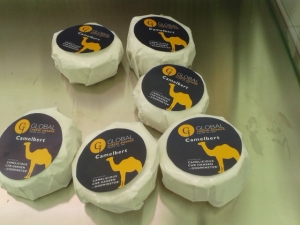 Camelbert is a soft, bloomy-rinded, pasteurised camel’s milk cheese – said to be the UK’s first. Given that the milk came from Dubai and as I write mainly about cheeses of the British Isles, it was a bit of a question as to whether this is a cheese of the British Isles but, given that it was produced in Somerset by cheese-makers Godminster, it seemed to tick enough boxes. I’d heard of camel cheese before but that was made in Mauritania which is a bit too far to travel to, even for a cheese-lover such as myself.

Making camel’s cheese was always going to be a challenge as it’s difficult to coagulate the milk into a curd – it doesn’t have the proteins to coagulate naturally – and protein and fat tends to be lost into the whey. In fact getting the milk in the first place can be a challenge: camels are hard to breed, have long pregnancies and don’t give as much milk as you’d think. Some of my fellow judges also pondered how easy it is to milk a huge, grumpy camel. I’ve seen it done in pastoral regions of Africa and have to say the camels didn’t seem too annoyed but let’s face it, not many of us would risk annoying a camel.

Given that Somerset is not known for its roaming herds of camels, the milk for this enterprise was supplied by a company called Camelicious in Dubai, who presumably do know how to milk a camel or two. The milk was pasteurised and then cultures added, as well as vegetable and camel rennet. When the milk had coagulated, the curd was cut; usually it takes a couple of hours before curds are ready to be moulded into a Brie-style cheese but the camel milk was stubborn and had to be left overnight. The curds were apparently soft and fragile and wetter than usual. Eventually though they were ready to leave for the ripening room, to grow the bloomy white rind, characteristic of Penicillium candidum cheeses like Brie and Camembert.

If it could be made commercially viable, camel’s cheese could be marketed for its health benefits. Camel’s milk is high in vitamins, minerals and carbohydrates, including Vitamin C and is also, fat-wise, high in ‘healthy’ unsaturated fats and is 50% lower in fat than cow’s milk. Some studies even suggest that it has positive effects on patients with Diabetes Type II, Hepatitis and auto-immune diseases. This cheese was produced for the Frome Cheese Show and the lady who gave me the cheese wouldn’t be drawn on whether it would become a regular line, although it had certainly generated lots of interest.

I have to admit to approaching the cheese with some trepidation. Given that some goat’s cheeses can taste like a Billy’s backside and sheep’s cheese can also have quite a lanolin tang, I was concerned that such a big, shaggy animal as a camel might impart a beastly kick to the cheese. In fact, it tasted different but not markedly or offensively so. It was rich and creamy – surprisingly so given the low fat content of the milk. I could also taste salt, more so than in a usual Brie. All in all, it was quite pleasant – it would certainly be interesting to taste it a week or so later when it had started to get gooey and escape its rind. Anyway, it didn’t give me the hump! (Sorry, so sorry for that last gag.)