You can’t move in the food blogosphere at this time of year for wild garlic. I even saw someone on Twitter refer to it as a ‘wild garlic willy-waving contest’ the other day, which did make me titter. But, nevertheless, I was determined to find me some and pair it with some cheese. I’d heard rumours that there was a patch of wild garlic in our local woods (and when I say ‘woods’ please do not imagine anything expansive; Robin Hood would have lasted about ten minutes before he was either discovered or one of the dog-sized rats that live in there ate him alive). But still, it’s a pretty enough spot for SW17. 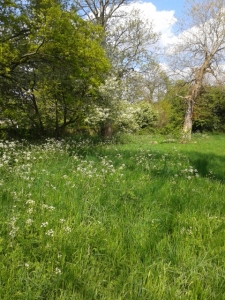 After about an hour and a quarter of wandering I still had yet to locate a single plant of the stuff and, considering what the woods have been infamous for at times, was worried that I might start to attract the attentions of the local constabulary (although the presence of two small muddy children waving sticks would probably repel most punters, to be honest). I started to climb the bank back towards the road when I finally spotted one measly plant. And, of course, Sod’s Law dictates that when I was five minutes from home I spotted a whole flipping lawn of wild garlic.

At least, I thought it was wild garlic, judging by the smell. But the leaves looked way too skinny and not dark enough so I got confused, shoved some in a carrier bag anyway and headed home. It was there that I discovered that rather than the better-known ransoms, I’d foraged their wild garlic cousin known as three-cornered leek. Still garlicky, still edible. So that was fine.

And what better to pair with a wild leek than a wild Welsh cheese? Perl Las means ‘blue pearl’ and it’s a pasteurised, blue, cow’s milk cheese made by Caws Cenarth near Cardigan in Wales (who also make Perl Wen). It’s an enigma of a blue cheese; creamy and mellow but with a punch that creeps up on you. Blue cheese and mushrooms are always a great match as, of course, are mushrooms and garlic. I even made my own pastry again. Oh yes. 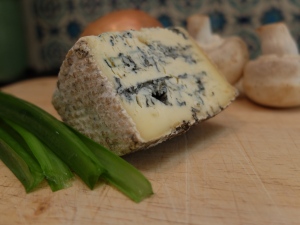 The basic quiche recipe is from the good old Beeb. To make the pastry, rub together the flour and butter with your fingertips until it looks like breadcrumbs. Add 8 tbsp cold water, then bring everything together with your hands until just combined.

Heat the oven to 200C/fan 180C/gas 6. Roll out the pastry on a lightly floured surface to a round about 5cm larger than a 25cm tin. Use your rolling pin to lift it up, then drape over the tart case so there is an overhang of pastry on the sides. Push the pastry into the corners of the tin. Chill it in the fridge for 20 minutes.

Meanwhile heat the olive oil in a frying pan and fry the onion until soft. Add the mushrooms and wild leek and fry until the mushrooms are cooked. In the picture below you can see why it’s called ‘three-cornered leek’ as when you cut the stem, if forms a sort of triangle.

Lightly prick the base of the tart with a fork, line the tart case with a large circle of greaseproof paper or foil, then fill with baking beans.

Blind-bake the tart for 20 minutes, remove the paper and beans, then continue to cook for 5-10 minutes until biscuit brown. Trim the pastry edges to make it look neat. Combine the eggs and milk and stir through the fried vegetables and the crumbled cheese. Pour it into the tart case. Bake it for 25 minutes until the filling is set.

Because this recipe uses blue cheese I am adding it to this month’s Cheese, Please! Challenge, which you can find here.

Because I used an onion from my veg box, I am also adding it to In My Veg Box this month, hosted by The Spicy Pear and Citrus Spice UK.