Summertime…and the City is cheesy…

Back in May, when I sat huddled in my thermal slanket, the hail battering against the windows, booking a place on a Cheese Walk in the City of London seemed like a good idea. Hopefully it would be a typical English day in July: overcast, fairly chilly and with a middling to high chance of a freezing downpour. So I admit that when the day dawned with the kind of heat that melts pigeon’s feet into the tarmac, it suddenly seemed less appealing. And throw in a tube journey and consuming large quantities of cheese and wine in the sun and the prospect started to feel more like appalling. But I take my role as intrepid cheese correspondent seriously (coupled with the fact I’d already shelled out for it upfront) and so I donned the Factor 30 and set forth valiantly.

The walk had been organised by Cheese at Leadenhall, a cheesemongers set in the ancient market of the same name. The market itself is an arcade of Victorian splendour, all red and gold girders and intricate tiles, hidden away amongst the uniform steel and glass of the City.

At first glance, it seemed a strange proposition, cheese history in London. When most people think about cheese and history, it isn’t urbanity that springs to mind; dairying back in ye olde days seemed to consist mainly of buxom milkmaids dancing round the maypole and ploughman’s lunches in sepia hayfields (or have I just read too much Thomas Hardy?) but, of course, London is an ancient place of trade and commerce and records indicate that cheese was being sold in Leadenhall as early as the fourteenth century. At this time, anyone bringing cheese to sell in London was legally obliged to take it to Leadenhall but I have a feeling that Cheese at Leadenhall do it for the love these days.

Our guide was Henry Eliot, an affable and knowledgeable chap who co-edits Curiocity, a map magazine exploring the unusual and unexpected within London. We were a mixed bunch of cheese walkers, of all ages and nationalities, hardcore turophiles and those who didn’t like ‘strong or blue cheeses’ (they were in for a bit of a rough time, to be honest). 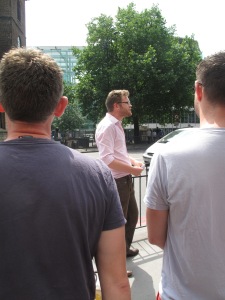 I won’t spoil the secrets of the Walk for future venturers, suffice to say that it included cheese comedy and tragedy, cheese art and architecture and cheese amidst death and disaster (gasp!) And lots of cheese-eating. Cheese at every turn, it seemed. Cheshire cheese, Red Leicester, Stilton, Parmesan…eating cheese in the searing heat had felt like a bad idea but, once we got going, it made perfect sense, especially as each cheese neatly illustrated one of Henry’s tall turo-tales. It helped that it was all great quality cheese; nothing you’d sacrifice to a mousetrap here. The only chucking away of cheese was at our own cheese-rolling competition, fiercely contended in front of a bemused audience of Saturday afternoon drinkers at – you guessed it – Ye Olde Cheshire Cheese. 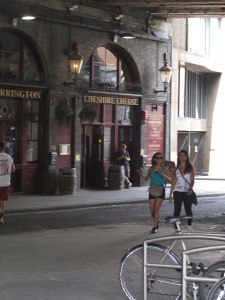 An hour later and back at the Cheese at Leadenhall, the cheese and wine tasting proper began.

Sue and Lou were on hand to serve our wine and cheeses and explain their choices to us. (I won’t even attempt to describe the wines to you, only to say that they were all delicious and complemented the cheeses perfectly; if you think my knowledge of cheese is rudimentary, believe you-me, it looks like PhD material compared to my knowledge of wine…)

Golden Cross is an unpasteurised, mould-ripened goat’s milk cheese made on Greenacres Farm near Lewes. It tasted creamy and fresh, a little bit goaty but not over-powering and everyone around me seemed to enjoy it.

Ossau Iraty is a French sheep’s milk cheese, unpasteurised and semi-soft. Sue told us that it won the World Cheese Awards in 2011. It had a subtle taste, slightly nutty and sweet. A couple of people around me weren’t impressed and found it a bit bland but I think it would make a good addition to a cheeseboard, to balance out some of the stronger flavours you might choose from blues or rind-washed cheeses.

Old Winchester is a pasteurised cow’s milk cheese made on Lyburn Farm near Salisbury. A bit of a gouda-cheddar hybrid, it’s aged for at least eighteen months. It reminded me a lot of Reypenaer V.S.O.P., an aged Dutch cheese I tried a few weeks ago; it had hints of butter and caramel and – best of all – those same amazing little crystals that I learned back then are tyrosine, clusters of amino acids caused by the proteins breaking down as cheese ages. This one was a winner with everyone.

Shropshire Blue is a cheese that most people are familiar with but this one by the Colston Bassett dairy was a corker. A pasteurised cow’s milk cheese, coloured with annatto, it is injected with Penicillium roquefortii which gives it its amazing network of blue-green veins (and once again, I give praise for the fact that although I am allergic to Penicillin the medicine, the cheese type doesn’t count, huzzah!) This is a seriously good cheese that had everyone ooh-ing and aah-ing at its creamy texture (excepting the blue cheese-hater, rather understandably).

A cheese quiz rounded off the event and then we all wandered off into the afternoon haze, cheesed-up but not at all cheesed-off, even by the heat. Would I go back? Well, there was talk of raclettes being on offer in the winter and so it seems too good an opportunity to miss…

16 responses to “Summertime…and the City is cheesy…”