It was always going to be hard to choose the first cheese to kick off my cheese odyssey. Where to begin? More than 700 British cheeses…at least 400 in France…Mauritanian Camel Cheese… Sardinian Rotting Maggot’s Cheese…

Dorset Blue Vinny won by managing to combine two of my favourite things: blue cheese (dribble) and Dorset, scene of many happy childhood holidays. It’s also a cheese that I’ve heard of but can’t remember ever tasting (I know, I know, but remember that I come to you if not a cheese virgin then certainly a cheese lover who’s only had a few fumbles with fromage). 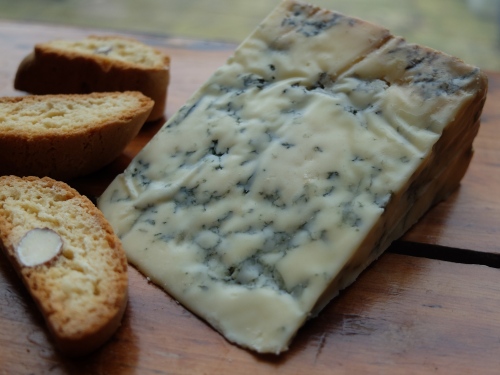 Dorset Blue Vinny is a hard, blue, unpasteurised cow’s cheese. A traditional farmhouse cheese, it used to be made with the skimmed milk left over from Dorset’s lucrative butter-making industry. The result was a very hard and dry cheese; by all accounts, it could be a bit on the ropey side although legend has it that Thomas Hardy was partial to a slice.

‘Vinny’ comes from the Old English for mould, vinew, and for anyone a bit suspicious of blue cheeses, reading about some of the historical methods used to encourage the characteristic blue mould will probably have you running into the arms of Dairylea. Patrick Rance in his seminal tome The Great British Cheese Book talks of ‘accounts of natural blueing from mouldy old boots kept purposely alongside ripening cheeses’, of badly designed drainage in farm buildings encouraging ‘the added sharp gift of ammoniac vapour from below’ and ‘the drawing of mouldy harness through the milk in the vat before cheesemaking began, thus ensuring a spread of vinew throughout the cheese’. When I made cheese at home, I fretted for a long time about a fly that had landed for a millisecond on my curds; put in this context, I feel faintly ridiculous now.

With the advent of the railways, the invention of machine skimming and the Grim-Reaper-of-Farmhouse-Cheeses that was the Second World War, production of Vinny declined throughout the twentieth century and by the 1970s the cheese was all but extinct. Revived in 1980 by cheesemaker Mike Davies, it is now solely produced at Woodbridge Farm near Sturminster Newton.

So, what’s it like? Well, as a blue cheese lover it hit the spot. The blue veins pack a punch but it’s creamier and subtler than, say, Stilton. We ate it with a plain oatmeal biscuit but I imagine it would be nice with a rosemary cracker or even just a hunk of fresh white bread. I have dreams of moving to Dorset. So it’s nice to know that I could eat this all day.