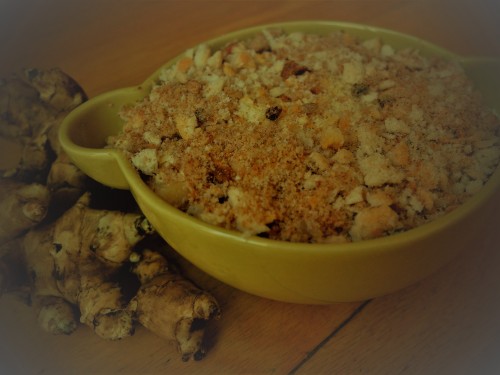 Jerusalem artichokes are like the tube engineers of the allotment. From February until November, whilst other vegetables are getting all showy and plump above the soil, the artichokes beaver away underground, doing their thing. Considering, or perhaps because of, their unstoppable ability to produce monster yields, they are not a popular vegetable, despite their sweet and nutty taste. Admittedly, this might also be due to their reputation for causing…ahem…digestive mayhem. As far back as 1621, John Goodyer was moaning that ‘which way soever they be dressed and eaten, they stir and cause a filthy loathsome stinking wind within the body, thereby causing the belly to be pained and tormented, and are a meat more fit for swine than men.’

In this dish I’ve combined the much-maligned tubers with parsnips, which does seem to reduce their potential for havoc, although I still wouldn’t recommend it as a date-night dish or if you have to make your once-in-a-lifetime TED Talk the next day. I’ve also used Quicke’s Mature Cheddar. Produced on a farm in Devon which has been in the same family for 450 years, Quicke’s Cheddar is an artisan cheese, handmade using traditional methods. Each part of the cheese-making process is carried out by hand until, finally, it’s wrapped in muslin cloth and allowed to mature for anything from three months to two years. Earthy and rich, it pairs perfectly with these root vegetables.

450g Jerusalem artichokes, peeled and cut into 3cm chunks (if you don’t want them to discolour, pop them in a bowl full of water with half a lemon squeezed into it)

A splash of cider vinegar

Preheat the oven to 180/fan assisted 200/Gas Mark 6. Heat the oil and butter in a large frying pan and then add the parsnips, artichokes, garlic and bay leaves. Cook for five minutes, until they have started to caramelise then season and add the vinegar. Cover the pan and cook for a further five minutes.

Tip the mixture into a baking dish and pour over the cream and grated cheese. Mix it all together until combined then cover the top in the breadcrumbs. Bake in the oven for 30 minutes and serve either as a main or side dish.