It’s Chinese New Year today and so when I skim-read somewhere that we were entering the Year of the Goat it seemed like the perfect opportunity to present you with a goat’s cheese this week. But then things got complicated when I read this article. The celebrated animal in question derives from the Mandarin Chinese character ‘yang’ which means simply ‘horned animal’. So whilst some people interpret this as ‘goat’ others are in the ‘sheep’ or ‘ram’ camp. When I used to work for a farming organisation we sometimes used the term ‘shoats’ when we wanted to talk about a mixed herd of sheep and goats. That would solve everything. Except for the fact that I really don’t have time to track down a British mixed milk sheep and goat’s cheese, if such a thing even exists. So you’re getting goat’s this week and that’s that. Without further ado, here is Saint George: 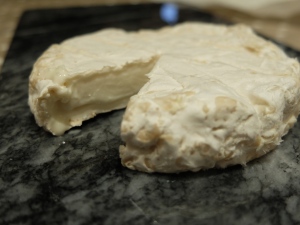 Saint George is a soft, pasteurised goat’s milk cheese made by Lyn and Jenny Jenner at Nut Knowle Farm near Hailsham in East Sussex. The story of the Jenners’ entrance into cheesemaking is one of my favourites. Back in the late seventies they lived in a village and had two Alsatian dogs. When the milkman came at 4am the dogs would start to bark and this upset the neighbours. (You can imagine the kerfuffle, can’t you? Grumpy muted conversations in the local Co-op. Only Leylandii hedges and cockerels would cause more of a rural ruckus).

Someone suggested to them that they buy a goat for the milk so, rather obligingly, the Jenners did some research and bought a goat. They then joined a local goat club who informed them that goats are herd animals so they bought another…then another…then another. Before they knew it they had 18 goats and were milking them all twice a day and making cheese, all around work. It was getting out of hand and so they had to decide whether to ‘knock the goats on the head’ as Mr Jenner is alarmingly quoted as saying, or to forge a new career. They decided to concentrate on the cheesemaking – a bold move at the time, when British goat’s cheeses were rare and viewed with suspicion (‘foreign muck’).

Thirty years later and the Jenners have 650 goats, make more than a dozen types of goat’s cheeses and sell to some 1,600 customers a week at more than 100 farmer’s markets. It was at such a market that I came across their cheeses with my family in tow. ‘Hello,’ said the nice cheese lady, looking all dewy-eyed at my children. ‘Would they like to try a bit? It’s probably a bit strong for them but they can have a taste.’ She then watched open-mouthed as my brood single-handedly demolished half of her stall in two minutes like a brood of locusts after a spinning class. So I felt guilty and had to buy lots of cheese.

Saint George is a camembert-type cheese. It’s usually matured for just two weeks when it develops a lovely bloomy rind. Inside, mine was lush and creamy, the rind just starting to get slippery over the paste. It smelt faintly mushroomy with a whiff of ammonia. And it tasted like goats. This is not a goat’s cheese that tastes only of Sicilian lemons and fresh hay. This is like burying your head in the big sweaty ginger mane of a British Toggenburg buck. Put quite simply: if you like a goaty goat’s cheese, you’ll really enjoy this one; if you don’t, best stick to cheddar.

Next week, in the interests of Chinese New Year balance, I bring you a ewe’s milk cheese. Ram’s cheese may prove a little trickier…