This was so nearly a post that didn’t happen. Work, travel, deadlines, the parental trauma that is creating a World Book Day costume (and a mighty fine cat-food-box-turned-croc’s-head it was too) and a loitering head-cold left me fit for nothing more than eating pizza horizontally. ‘Stuff it,’ I thought. ‘I’ll give it a miss. No-one’s going to weep because I don’t describe a cheese one week.’ But then, every time I opened the fridge door for more pizza, I saw this little stumpy cheese sitting there and I swear I started to feel sorry for it. And so I had to do it, pizza in hand.

And here is my cheesy tormentor, Dorstone: 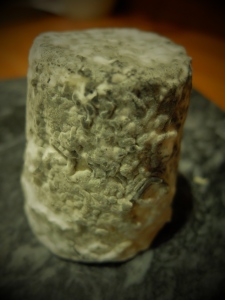 Dorstone is a soft, unpasteurised goat’s cheese made by Charlie Westhead at Neal’s Yard Creamery in Herefordshire, which sits atop Dorstone Hill, hence the name (it’s also a local village). Charlie was one of the first employees of Neal’s Yard Dairy before he took over their Creamery, then located in Kent, and eventually made it his own and moved it out west.

The unpasteurised milk is sourced from a farm over the border in Gloucestershire. To make the cheese, a starter and rennet are added and the milk is left overnight in large buckets to let it set. The rennet in this case is interesting as Charlie chooses to use kid rennet, therefore matching rennet to the dairy animal which is producing the milk (most cheese-makers just use calf rennet). There is some talk of this producing a ‘3D flavour’ but this concept would blow my tiny mind at the best of times; I’m assuming it means it adds to the complexity of flavours rather than you need to wear special glasses to eat it.

When the curds are set, they are gently cut and scooped out into plastic mesh sacks and left to drain under their own weight. Salt is then sprinkled over and the curds are put into small moulds. Three days later they are rolled in ash – the alkalinity of the ash helps to neutralize the natural acidity of the cheese which can inhibit ripening. This creates the perfect environment for a Geotrichum rind to grow, which is what gives the cheese its ‘brainy’ appearance after a while. Other moulds start to grow on the cheeses as they age, blue and green spots and white fluffy bits. The cheeses are usually eaten after just two to three weeks.

The texture inside the Dorstone was lovely, almost like ice-cream, fluffy yet firm, and the paste snowy-white. The rind slips away from the paste and there’s a slightly liquid layer just underneath. This isn’t an entry-level goat’s cheese as there’s certainly a tang of the buck about it, although not offensively so (if you’re offended by such things). It’s very creamy with a citrusy tang to it, as well as that slight goût de Billy. It was a nice cheese to eat in chunks and also melted happily in a mushroom omelette.

Thank you, Dorstone, for forcing me off the sofa. I’m heading back there now, pizza in hand (sprinkled with a little goat’s cheese…)

With additional research from Neal’s Yard Dairy, Culture and Portrait of the Artisan.